It’s time for a short update here with the work with the Zoeticx Server.  As you may or many not be aware 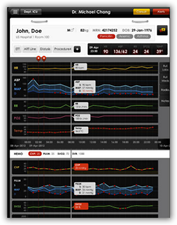 The Zoeticx  product suite has both client applications  for mobile devices and the Clarity Server has the embedded applications for alerts and is located at the EMR Gateways.  Below is an image that gives you a rough idea how this works.  The Ipad and IPhone apps actually can be downloaded from the ITunes story and they don’t do you much good without a system to operate with but it makes it easier for acquiring the applications.  The Clarity Server here is being used for interoperability versus the examples above relative to business intelligence and big data reports. 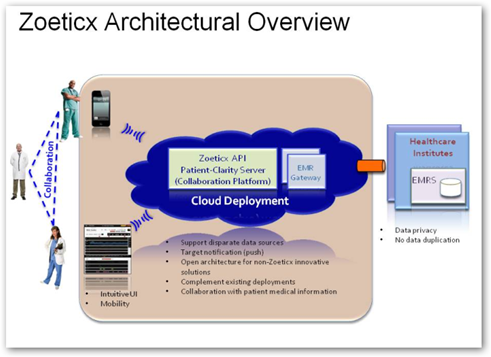 You can read about each component and how they work.  The app on the IPhone is scaled down a bit from what appears on the IPad of course and I talked about that a while back with the CEO developer and he explained that you are going to kill your eyes with a full on Ipad visual on a phone.  The video below gives you more a a thorough walk through on how this works.  All devices that participate have to be registered for security reasons and that also allows a device to be removed from access as well if needed.  Overall what is great here in my opinion is the fact that while the connection is live everyone gets a common user interface that is intuitive and both sides see the same thing and can add and and modify records as needed.  Once the connection is no longer needed, it is broken.  When you think about the size of data warehouses today with synchronizing data and the cost, well this makes a lot more sense as you have true connectivity here and no waiting for a server to synchronize and maintain yet another data base if you will.

So here’s a cost maintainable solution for interactive and inter-operative records.  The company has opened its API for developers as well to write applications.  Back February Nuance gave the product an app of the month recognition as you can see speech recognition used with the interface in the video.  So far I believe there are read/write capabilities already in place for both Epic and Allscripts.

With all the discussion with integrating the ALTHA DOD medical records system and the VA VistA medical records, this could be something worth a view over there as one point the two agencies were going to bring up a common window of each EMR on half the screen.   On a related note I had a couple other observations on the VA as relates to their medical records and the FBI, who done it and spread the hole in the scheduler.

The Zoeticx solution would take care of that with a common user interface for each side and again neither the VA nor the DOD has to invest in huge costly remakes of their entire systems, other than regular technology updates to keep each system up to date with current technologies.

I know in the public eye it looks like the VA and DOD have done nothing when in fact that is not the case as this is a project more intense than Healthcare.Gov as you have existing data and with the insurance exchange everyone was creating a new account and pulling data from existing sources.  This could be yet another option to be explored by the two agencies and after all it is our taxpayer money at work there.  Here’s an example of an option that has been explored with the VA and the NHIN that shares outside the systems.

Here’s a short clip on the developer/CEO and if you think back a few years ago, Aqualogic was sold to Oracle and is now their familiar “WebLogic” product that’s used everywhere.  He talks code and engineering:)

Prior to Amdocs, Thanh was the Senior Vice President and General Manager at BEA Systems, holding P&L responsibility for the $100M Aqualogic product group, which provided Service Oriented Architecture solutions.  Before BEA, he held GM responsibility for the Development Products Group at Borland Software Corporation.

And a short opinion from Thanh…

“On HIE, in my opinion, it solves the insurance and analytical – off campus requirements. It is a costly and very hard to be adapted by healthcare institutes. Its technological architecture is based on data duplication. Here comes the list of challenges: data synchronization cost (it increased significantly basing on the number of 'nodes' you connect), come along are maintenance cost (equipment, IT headcount). The core of the interface is based on HL7 – very costly – both from EMR and implementation cost. But the most visible issues is the lack of near time database. This kind of implementation does not sit well with actual patient care in hospitals. Last but not least, the data is a subset. Most of HIE handles general items such as allergies, demographics, chronic, etc. In a number of cases, if the actual history and treatment details are needed, HIE is not the answer. So, in a way, HIE has its own use, while everyone seems not to look at another alternative.”