It’s funny all kinds of privacy information all over the web and again I’m insistent that we need to license all data sellers as we don’t know who they all are to regulate and we have no index so government and everyone else is just spinning their wheels with getting any type of law in place to protect or help consumers and if you look the folks involved with all these meetings, 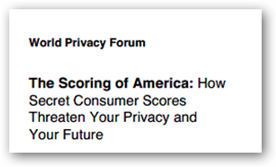 very few if any have any data mechanics logic and think software companies will write APIs to help us out.  Instead we get legal complex privacy statements to read and actually this mechanism is having  a reverse effect as I and I think many others just shine it on and move on as it’s too stressful to try to figure what they are saying, again I just move on if it’s too much as I have so many other things going on in my life and apps are mostly options.

If you didn’t read the World Privacy Forum report, it’s a good one and fair and explores both sides of meaningful scoring and “junk science” scores a bit too.  The rest of the world is kind of watching this insanity occurring in the US and as I said in the title any time you query and score and develop some additional type of data on a consumer, guess what we have data burning a hole in our pockets to sell.  All of the data sellers, and this goes beyond data brokers want to keep this real low key too as they do it but they really want to stay under the radar about it and just collect their cash.  It’s easy money once the queries are written that start hauling in data.  Banks are making out like crazy as well as health insurers and many other types of companies, Walgreens pulls in an easy billion a year and it may be higher than that and you know CVS is right up there with them.

All of this is not ethical and you will never get that from algorithms, that’s purely human so when you see stories about someone g

etting their pension cut to $5 a month, that’s a Killer Algorithm at work.  Two years ago I said this was a growing issue, but nobody paid much attention and here we are now.  You have credit agencies mining the web for anything they can find on you, and worse yet we have our somewhat  goofy Consumer Protection agency that wants to build a data base on all US consumer credit data.  He has no clue on hard that will be to keep up and the cost of warehousing it is almost non sustainable but that’s the kind of thinking non data mechanics logic folks come up with.

Richard Cordray Yet One More “Algo Duped” Government Executive Sucked In To Virtual Values and Unable to Locate the “Real World” Now Creating Huge Data Base Of All US Consumer Credit Information… Mr. Corday is

and selling data to someone else too.   It seems like people just can’t make this connection who are on the outside looking in but the ones on the inside are making billions selling data so they are more than happy to create some additional proprietary scoring, just like FICO did with their farce of a medication adherence scoring, total bunk but they can make money selling it and again consumers get hurt as it’s flawed data, proprietary that nobody can model and recreate so we just end up trusting old FCIO money bag quants and coders who created this.  The quants are getting paid well for doing their job and bringing money in.   The World Privacy Forum takes then to task lightly too as FICO says all they need is a name and address to “score” you for medication adherence.

So there you have it as to why this compulsive “Scoring of America” is taking place as it creates more data to sell.  It’s funny that most privacy reports and folks just don’t want to touch the fact that “selling” occurs but I go the whole picture, follow the data and the money today, you need to do both.  The White House Privacy and Big Data report, not a mention of data selling, totally bliss non data mechanic folks like we have seen at HHS with Kathleen Sebelius and now Mary Jo White at the SEC…”no it’s not rigged” when in fact with the excessive scoring that is taking place in the US, yes it is rigged and it’s not limited to markets.   The President addressed it but that’s where it started and ended but even the White House today is using some junk science themselves and seems to be behaving more like a bot with their communications and information they send out, just like the rest of the stuff in my mailbox as it doesn’t even stand out much anymore except for the letterhead at the top.

Now after reading this does anyone wonder why inequality is now growing at an accelerated pace?  The wealthy don’t have to deal with this so they are pretty much untouched.  BD