With all the fuss over the fake Facebook Science, maybe time to recommend a book and I have not read it yet but it’s on my list as 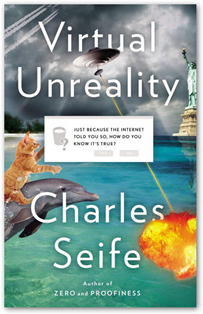 it just came out and I read his prior book “Proofiness” which I wrote about a couple years ago.  Here’s a link to a short interview as what’s done with all new books when they come out.  I think in the same line and thus I felt this might be a good post today as I see this nonsense all over the place myself.  Yesterday morning I got  on the computer and there was this mass of tweet and links all about this Facebook study done two years ago and of course Facebook is smart and knows their marketing and wanted some attention, they do that as do other marketing folks out there.  Secondly I thought perhaps the data scientist was maybe a little full of himself as it’s a very competitive field and these folks are almost known as wizards by some due to the type of work they do with modeling and finding solution for financial savings as well as efficiencies and both focuses are there and sometime the solution is both.

Myself being a former coder and developer I just try to add some common sense here as the perception someone not in technology will have will be different from mine.  I experienced that with doctors years ago in writing a medical record system as “they guess” and “I know” however, their input in what ever form it takes is important as of course you need the user input to make software work well and it’s hard.  There’s a lot of going back and forth by all means.  Once I sat a doctor down and let him walk through Visual Studio, the tool from Microsoft used to write software and he had an entirely different view of what I did after that and it was a good thing as I would get to see what he did, but he really didn’t understand without a visual of what takes place on the other side to create what he desired, etc. and what restrictions I had to work with.

Here’s the link to the short interview with Charlie Siefe about the book and you can scroll down to the footer of my blog and watch his video presentation given at Google in New York a couple years ago or visit the Killer Algorithm page to watch it as video #1 over there, where there’s more from folks smarter than me that are taking time to describe and help the layman understand what really goes on.  Again I do my best and sometimes just sit there and shake my head at the perceptions I hear from folks at times and try to lead them in the right direction.  You have marketing out there that takes advantage of this too and that’s a big part of the problem too and I try to point that out or direct people to a book like this or other videos that can do it better than me.  Amazon link for book.  In government this perception issue has been so public with some and it’s still out there with government executives and Congress I started calling it “The Sebelius Syndrome” as her off perceptions were just in your face all the time and so out of sorts with her own self perceptions too.  It hasn’t been above the White House to get caught in junk science too as this post will tell you.

never seen, but we also want some privacy as nothing is for free and your data is sold left and right and you have no clue.  Take a look at my campaign to the left if you like as I’m trying to do something about that and at least get data sellers licensed as step one toward privacy along with consumers having a look up point to where they can research what kind of data is sold and who they sell it to.  I have already been working on this for a couple years and need a little help if I can get it as it will help all of us.  I just got tired of all the “privacy experts” not knowing any data mechanics and not knowing how to go about it and have some success.  It’s not their fault but they were missing an element and it’s been missing for years in many places with a model and not creating some magical algorithm that will do the job.  Nobody has been approaching “real privacy” regulation of any sort with a model.

I’m right in tune with what Charlie says and ironically have written about the same in a few posts and the link below being one and I call it “The Grays” and like he says, people can’t tell the difference anymore and that’s scary.  Mine is just a blog post but I have a few of them on this topic.  It’s odd but the media is very powerful as I’ll have people argue with me about how things occur on the web that are not in technology with their perceptions and you just shake your head at the power of marketing when folks are so stuck in”virtual” mode and are “going to be right”. I learned a long time ago there’s more important things in life than being right all the time and it’s more important “to do the right thing” and not everyone does that as you get “code hosed” at times on the web.  Check out all the videos in the footer here when you have time, Charlie is #1 and they are all good.

We want honesty and truth out there and we are not always getting it and I call it folks looking for “algo fairies” and granted we do have some really top technology being developed that is very smart so when some of the psychological stuff gets mixed in, well people think everything is possible and in fact it’s not and even veteran technologists like Larry Ellison are aware of this the bring their message forward as well.

So far again too if you find that some technologies are upsetting you and that you really don’t need them, then turn them off.  I do that all the time and I have my little addictions too, like Twitter and try to harness myself a times too.  There are folks a lot smarter than me out there and that’s why I made the Killer Algorithm page as their videos too will help you make sense of some of this as we all get fooled at some point no matter what your education level is.  Now the advertisers doing a little bit of code hosing are not going to like that page or like having you get smarter of course but hey it is what it is if you choose to learn more about how it all works:)  BD

Monday, June 30, 2014
My Commentaries , Other Items of Interest , Technology