Home » Medically Related » Other Items of Interest » Three NHS Hospitals Declared Bankrupt, Board Suspended and Placed Under Special Administrator in the London Area

Not only does inequality exist with hospitals in the US but also now in the UK.  This is a big deal as now the facilities have 45 days to come up with a game plan on what to do.  As you can read the centers take care of 750,000 consumers and the debt is nearly $100 million.  Other trusts are also in dire financial straights and now the NHS may have to look at privatizing as an alternative. 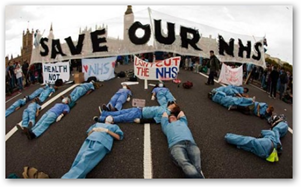 Actually 2/3rds of the hospitals in the NHS are in debt and ironically on the other hand London has more billionaires than any other city.

To help make up for some lost revenue  trusts will be offered a premium of 25% on top of what  they receive for providing treatment if they report that they treated a patient from one of 27 other EU member states.  In April a former healthcare executive from the United States, formerly with United Healthcare took over as the head of the NHS. Two private firms, Capita and Optum (a subsidiary of United Healthcare) are bidding on the provider framework for support services so no surprise that Optima want to expand their footprint in the UK and expand managed care.

One hospital has already been privatized and is run by a company named Circle Healthcare.  You can read below that the company Circle was founded by a former Goldman Sachs banker.

In addition a few months ago some data selling of patient records took place as well which of course did not sit well either as patients were betrayed with privacy issues of course and I wouldn’t like it either.  Also in the news no more free tummy tucks or breast enlargements either at the NHS.

NHS Patient Data Used By Marketing Consultant to Advise Clients On Where To Target Facebook and Other Social Media Ads, And Let’s Not Forget the Barclay’s Breach While We Are At It, Medical Information Used and Sold As “Data Selling Epidemic” Continues to Grow

Recently though the NHS was voted the World’s Best Healthcare system.  BD

One of the key downsides of market-based health care  — that if your costs regularly exceed your income you go out of business  — is not typically associated with the National Health Service in the U.K. That is about to change. It has just been announced that the three hospitals that constitute the South London Healthcare Trust in London, England are to be effectively declared bankrupt, the board suspended, and the organization put under a special administrator. He or she will have just 45 days to provide the Secretary of State with recommendations on what to do with an organization that provides emergency an elective services to about 750,000 Londoners but has racked up nearly $100 million of debt in 2011–12 alone.

Why is this of interest to U.S. readers, aside from adding to the long-running debate on the pros and cons of operating a market in health care? It is because one option is to privatize one or more of the hospitals. By privatize, I mean a whole range of options from franchising out the management to a private company to taking over the assets lock, stock, and barrel and then providing services back to the NHS.

There are plenty of other NHS hospitals/trusts in England that are in severe difficulties, so this is likely to be repeated up and down the country in fairly short order. The political fallout is likely to be considerable, coupled with howls of indignation from local populations (and hospital staff) as the new regime takes action to try to balance the books.