Home » Medically Related » My Commentaries » Technology » Theranos On The Road To Expansion and Growth - Changing the Face of Medical Lab Tests, One Small Drop of Blood

Theranos On The Road To Expansion and Growth - Changing the Face of Medical Lab Tests, One Small Drop of Blood

This is a very long in depth article in Fortune magazine that really gives a lengthy update and history of Theranos Labs.  I blogged about the company before and even went to the point of informing friends in Phoenix about their services since I grew up there.  Affordability here is big and with charging around 50% of what Medicare charges for lab tests, well you don’t have to say much more there.  Again this is a great news article here and nice to see great hard news out there versus another data analytics story for sure.  Below I wrote about the first two stores opening in Phoenix and it’s expanded since then.  Arizona seems to be the pilot for the company wellness centers which are growing in Walgreens stores and even at some point the article states may make their way over to Boots in the UK, since it is now part of the Walgreens conglomerate.

One other part of their business is the fact that they manufacture their own test analyzers where other labs such as Quest for example buy their equipment from manufacturers, so everything there is in house, thus they do not require FDA approval as they are used only by Theranos and not sold.  The company is seeking FDA clearance for every one of their tests but there is no obligation or law requiring so so they will end up being the first only lab to seek FDA approval for LTDs (lab developed tests).

Holmes, the founder and CEO has her model dialed in well and understand how people work as far as not following through on lab tests and why and it could be location, time or the fear of needles and remember it’s just one tiny drop of blood here that can give results on a multitude of tests.  It’s also revealed here that Theranos is working with big pharma with clinical trials with GlaxoSmithKline and Pfizer to name a couple, where they do the blood testing.  The low cost is big as even folks without insurance can afford it.

Holmes, the founder is very brilliant individual and yet from what I am reading here and have read in the past it very tuned in to the human aspect while growing her business, in other words the service and labs her company provides “do something”.  We like that having intelligence tied to a tangible type of service in healthcare as that’s what helps us, versus some new fly by night app out there.  Doctors can sign up on their website as well to participate.  She has a good line up of investors and the article states she was very careful not to include VCs that wanted a quick run on their money with returns and Larry Ellison from Oracle too is an early investor.   Great video interview with Holmes below from Wired.

The wellness centers in the Walgreens stores may remind you of the retail clinics as they have a small area in the retail stores.  So far they have not provided tests without a doctor’s prescription and that could change.  It is interesting with listening to the Holmes field questions related to investors as she’s very cool about talks of IPO, etc. and clearly makes the point that she’s in it for what business does and not looking to turn a quick dollar at any time soon.  Again she stated she picked her investors wisely and wanted those in there for the “long run” and that’s great when we see just the opposite so much out there today.  Again this was a great article and really is the first that I have seen that really goes into detail about what the company does, their philosophy, etc.  Use the link at the bottom of this post to view article in it’s entirety.  The reporter stated he spent 4 with Theranos and it shows:)  BD

The company has performed as many as 70 different tests from a single draw of 25 to 50 microliters collected in a tiny vial the size of an electric fuse, which Holmes has dubbed a “nanotainer.” Such a volley of tests with conventional techniques would require numerous tubes of blood, each containing 3,000- to 5,000-microliter samples. 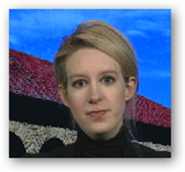 Services (CMS), and it is licensed to operate in nearly every state. It currently offers more than 200–and is ramping up to offer more than 1,000–of the most commonly ordered blood diagnostic tests, all without the need for a syringe.

Most important, Theranos tests cost less. Its prices are often a half to a quarter of what independent labs charge, and a quarter to a 10th of what hospital labs bill, with still greater savings for expensive procedures. Such pricing represents a potential godsend for the uninsured, the insured with high deductibles, insurers, and taxpayers. The company’s prices are set to never exceed half the Medicare reimbursement rate for each procedure, a fact that, with widespread adoption, could save the nation billions.

“Too often the question is, What’s your exit strategy?” she recounts, “before you’re really understanding what your entry strategy is.” She is building a company, she explains, that “30, 40, even 50 years from now will be defining new standards in terms of the way in which people will be able to get access to actionable information.”

Using DNA profiling Theranos can, for less than the cost of the conventional tests, identify a bug and its resistance profile within four hours, says Helfet, according to the data he has seen.

For 10 years Holmes patiently raised money and refined her technologies. As much as she needed money, she turned down many offers, she says, because so many investors wanted quick returns.