First of all let me explain that I’m an independent blogger that got started on this path about 7 years ago as an “accidental blogger” as I listened to people telling me “you should blog”…and some days I wonder what my life would be without this blog as it’s like attached to the hip almost these days.   I have some advertising here but if you look at my rates which you can see at the links, I’m not living off of it by any means and nor do I have any big corporate sponsors.  If one want’s to do that though, it’s up for discussion for sure:)

Since I established the page I am seeing people search for a book by this name when I look at my statistics and the visitors I get  are interesting here.  I have curated here a group of videos and links featuring many very smart people, smarter than me that offer some really good information and are educational for the most part at the layman level, and that’s the key.  This site was a spur from the Medical Quack blog and of course you can get here with the links.  If you have not been to the Killer Algorithm page here’s the link and you might want to book mark it as it might take an entire day to watch all the videos but everyone of them is worth it.

So that being said, to enter off into this effort I do need some help here as it takes money and quite a bit of additional research from what I am going to attempt to do as well.  I’m not anywhere near rich and I’m at the poor end of the scale if you will as taking care of my mother who died of cancer last year 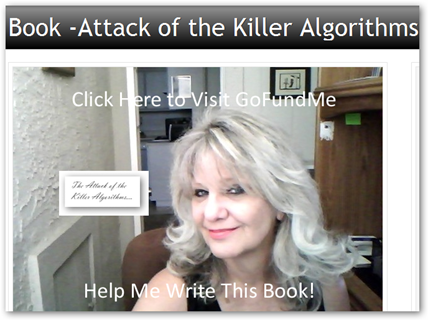 wiped me out, but I would do it again as that’s the kind of person I am but now I face the financial end of it with still recovering.

I know I’m not alone out there either with algorithmic formulas that score and judge us all the time,  but if I can give back some thing here that helps all, then it’s all worthwhile.  These are some of the road blocks you run across, like this one where Google decided I was a real duck and just flat out suspended me out the blue…that’s an Attack of a Killer Algorithm.

Couple years ago my car insurance company with algorithm added two new drivers to my policy…have never had any additional drivers, but I did sell my house about 9 months prior and guess who the new drivers on my policy were…that’s right the new owners of the house I had left 9 months prior…that’s an Attack of the Killer Algorithms where the parameters of the car insurance company made a decision, the wrong one basically stating that “consumer Barbara Duck” left pertinent information on her car insurance.

That’s the way it plays out but what really happened was data mining and selling with flawed data as they went out to public records and/or out on the web and connected to an old address, so here was Barbara Duck guilty from the data that was mined and flawed.  This is getting worse as well and again those are Killer Algorithm Attacks.  Killer Algorithms right now is what’s afflicting Obamacare as well and that’s where most of the problems lie, not so much in the law but the subsequent algorithms that don’t work together.

If you can, please help me out and nothing is too small or too big, it all helps out.  I’m just so darn tired of seeing people mislead and told things that are just not true.  If you don’t have any data mechanics logic, you odds of getting algorithmically soaked are higher.  I am hoping perhaps to even get some interview times with the folks that are in the videos I have curated to maybe add in to the content of the book as they are people I learned from as well.  Of course there will be occasional blog updates on the Quack as well on the progress of the book!

Thank you again for any donations with helping me get this book rolling!  The link to GoFundMe is also visible at all times on the right hand side of the blog.

Wednesday, June 11, 2014
My Commentaries , Other Items of Interest , Technology