Home » Medically Related » Other Items of Interest » Top Doctor For Miami VA Healthcare System Lost Medical License in New York, Had Issues With Florida Board of Medicine, But On the Internet He Still Works and Takes New Patients in New York With Plenty of Insurers…

Without knowing all the exact details here of each case it’s hard to comment and people deserve a second chance by all means.  The second issue in Florida was failing to accurately read a patient’s x-rays which lead to the patient’s death and I am guessing treatments were missed due to this as the article reports he did  not do proper follow up.  If proper treatment is not given then follow up would be missed as well.  Now for the next part of this discussion.  If you wanted to look up Dr. De Gennaro on the internet, well gee, he’s never left New York!  This is more on the Healthgrades and Vitals flawed data issues.  Over the last 4  years I occasionally post an error when I see and I don’t really go looking for it either and once in a while just do a random search and I find errors every time and this is no exception.

On Healthgrades no sanctions even though he surrendered his license in 2011 and promised to never apply again in New York and we have 5 star rating going on here.   Odd while I was on this page I get the “please give us feedback request” from Healthgrades too (grin).  The page still shows the doctor working Staten Island University Hospital.  You know when Healthgrades releases their hospital rankings, how does this impact those numbers?  Good question?  We got ads popping up all over the place which is basically why these pages exist with nobody minding the “accuracy” shop here, just make sure we have good “click bait” and get that ad exposure revenue.

Heck I wish some of those folks would come over to my blog and advertise (grin) at least the content is accurate at the Quack.  It’s amazing all the insurance plans he takes for being on staff at the VA in Miami for a few years and has no New York License. 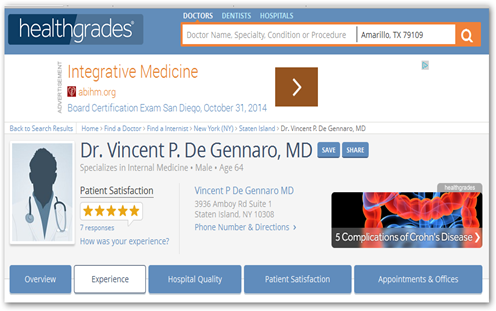 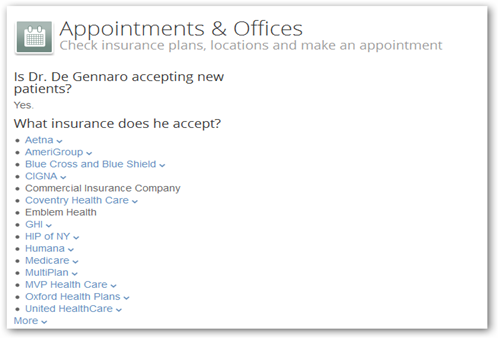 A couple weeks ago there was an article in the Wall Street Journal saying how doctors need to “own” these sites and take responsibility to update them, right, so the sites don’t lose any ad exposure revenue, right?  So much for that and it was funny to see so many on the web who are not aware of all the flawed data out there just lump right on to it, so see the power of the media when you maybe don’t have all the facts on what goes on with flawed data.  It’s very easy to write fake review too and one doctor told me he saw some bad stuff about other doctor friends and took time out to write some “fake reviews” to make them look better as he felt the reviews that were there were fake as well too and didn’t include the whole picture of a review.

Healthgrades to Merge with CPM Marketing–Will Their Data and Questionable Algorithms Will Be Improved For Consumers?

So next stop, let’s hop on over to  Vitals too and see what we find there…he’s only has 4 stars over here.  He’s accepting new patients over here too and is board certified…. 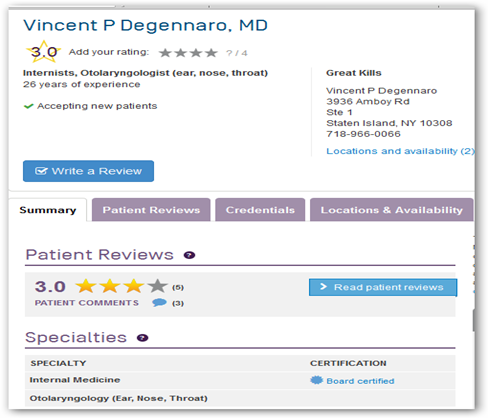 Not just one but he’s affiliated with 9 hospitals over here and is at the top 25% of Staten University as well.  If you scroll down to the bottom of the page you can see some great kudos from Fox News, NPR, Wall Street Journal, Money, Fast Company, The Huffington Post…so what’ that tell you, they don’t dig in and look and they too just assume these are great pages?

I wonder how many of the media folks might asked to be removed now:) This is the reason little bloggers like me exist to add our expertise in specific areas where we are in the know where major media might miss some of this.  They cover broad news and can’t do all the specifics and I understand that.  You have lots of ads running over here too and flashing at you and there’s nothing wrong with ads at all but damn get your content upgraded and accurate as these sites really do look like “click bait” and they don’t care what shows, just look at and click those ads, accuracy on doctors is not a concern it appears with the MD ratings that they promote to get you here. 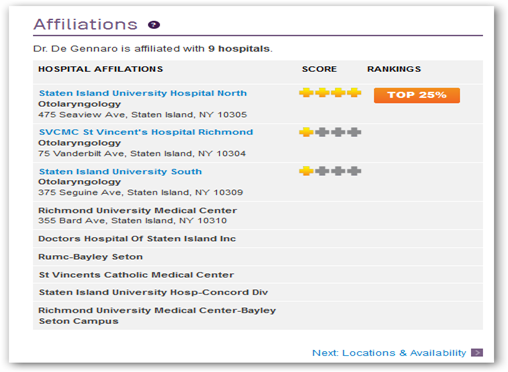 Maybe Google should take a look at their rankings here as their algorithms scare the daylights out of everyone else and move these folks down the search ladder a bit until they can improve the content they provide.  This has been going on forever as the AMA and I had a nice chat about this about 3-4 years ago when I found my former MD listed who had been dead for 8 years on there.

It’s been 4 years folks and and nothing has improved as a matter of fact it looks worse.  Really the sites are looking like the intent is only to collect ad revenue now.  Do you have to be so blatant about it?  Here’s my original post before the AMA and I chatted.  Don’t you think consumers deserve a little bit better than this as you bill yourselves as MD information pages.

I’ve written about upgrades that Healthgrades made and there’ little impact on that data that appears here and I also covered how they merged with a “marketing company” so we get better ad marketing I guess.  When it comes to getting some quality information does it have to be the bottom feeder end of a search here?  Vitals made some nice little videos that use a computerized voice that speak all the flawed data to you as well and it looks nice but the data is still flawed so a nice appealing format reading off flawed data..how nice:)  Being I have talked about this for 4 years now and nothing has improved, I’m a bit more vocal than before I guess.  Shoot I even found Michael Jacksons old doctor on there taking new patients long after he went bankrupt and vacated his offices.  Here’s a few tweets from today too you might want to look at.

MedicalQuack MD readers here be sure and fix your #clickbait at Vitals and Healthgrades:) Like you have time to help those sites w their ad revenue?

MedicalQuack VA MD lost license in NY? Want to race me to Healthgrades & Vitals to rate him:) #flaweddata bit.ly/1kSBITU | bit.ly/1kSBOuQ

From my MD mailbox too on this topic…

“They still include doctors who have had licenses revoked. One is on their list (Rodney Dotson at 'Best Match' #61 of 2121) , and when you click on his name it does tell you that his license was cancelled (HG doesn't say, but it was in 2008) . So I am not sure why he lands in their top doctors list.  And a lower ranked (at #137 but still in top 10%) doctor had his license revoked in 2011 and that fact is not anywhere to be found, and he is still listed as taking patients. (Check out Lee Friend ).

Out of the 150 'Best Matches' , I did a quick (probably undercounting here) check and found 7 retired doctors (one retired 18 years ago), 2 doctors with licenses revoked, 1 hospital administrator who has not seen patients in almost 25 years, and many others that moved as long as 10 years ago.

Bloating the provider list to 2,121 was accomplished by adding dentists, nurse practitioners, counselors, plus doctors who are practicing hundreds of miles away in other states.

IMO, Healthgrades is a bad joke for an authoritative web site. It is sad to think people use it for important health decisions.”

It’s been 4 years and you can’t do anything better than this?  I’m a patient person and used to write software and worked with data bases myself an understand the data mechanics and what need to be done and these two sites are not doing much except collecting ad revenue with little concern about the integrity of what they put out there, don’t you agree?  I just hope the VA is not naïve enough to look at these credentials when hiring doctors and does a little more extensive research maybe.  It might be nice to tell us that you are working on your algorithms at Healthgrades but that was two years ago..nothing yet?

MIAMI (AP) — A top physician for the Miami Veterans Affairs healthcare system surrendered his medical license in New York and faced sanctions in Florida one year before he was tapped for his current position. The 2010 sanctions resulted from the case of a patient with a torn large intestine, who died under the care of Dr. Vincent A. DeGennaro, at a Fort Lauderdale hospital.

The Miami Herald reported Saturday that a 2008 complaint filed with the Florida Board of Medicine by Florida's department of health alleges that DeGennaro misinterpreted his patient's x-rays and failed to do proper follow up (http://hrld.us/1tU4rs8 ), resulting in the patient's 2003 death.

DeGennaro, 68, did not answer a phone listed for his home in Pompano Beach Saturday. A recorded greeting said messages would not be returned.

A spokesman for the Miami VA told the Herald in a statement that DeGennaro's selection in 2011 as the senior executive physician for the Miami VA healthcare system had been approved by the Veterans Affairs office in Washington, D.C. DeGennaro oversees dozens of doctors at one Miami hospital and several community clinics. He still performs surgeries and sees patients.

In 2010 DeGennaro surrendered his medical license in New York in an agreement stemming from the 2003 case. He agreed never to reapply for a physician's license or again practice medicine in the state. DeGennaro could have had his license also suspended in Florida, but instead the Board of Medicine censured him and fined him $5,000, as well as charging him legal costs and 50 hours of community service.