Home » My Commentaries » Other Items of Interest » Technology » Want Privacy? Dump Your Smart Phone Says John McAfee And Stop Being So Lazy And Giving Out All Your Data

Google and laziness are the problems he says.  If anyone needs some privacy it has to be John McAfee 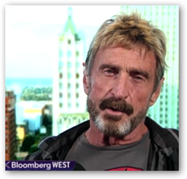 .  He talks about the “free” apps and the trade off and the freedoms we have given up willingly, and he say’s that’s laziness.  He states Google needs to have another big way to make money.  They do own other companies and but their data is still their big business.

Privacy is a very important right he says, and people need to be able to have affairs, and other things where folks tell little white lies.  We need to be able to keep things to ourselves, and I agree with that.  He said he used to change phones every week.  He has a new website, called brownlist.com.  He states a place for the little guy to complain but you also have to add a solution which is not a bad idea as you never know what might come out of it.  The old saying goes if you are not part of the solution, then you are part of the problem.

He then goes off about his problems in Belize and will be putting it on the website himself.  He sounds like he’s coming back to earth here and he’s right on the privacy part though as it is a mess with all the data selling for profit that’s going on.

the site and I can understand the data scientists getting full of themselves and wanting some press as it’s grueling work and things a normal human mind doesn’t do all the time and they want some attention.   I went over there and put the privacy campaign on there to license data sellers and require all disclose what kind of data they sell and to who.  Why not.  Anyway he’s right on privacy and what it is doing and the last of trust and I’ll leave the Belize story alone. If you can kick in a few bucks on the privacy/transparency campaign, that would be great.  We really need it.   BD

Tuesday, August 12, 2014
My Commentaries , Other Items of Interest , Technology