Roche To Buy InterMune Of Brisbane, California for $8.3 Billion

Pirfenidone is the drug sold under the name of Esbriet in Europe and Canada and does not yet have US FDA approval but according to the article below, it sounds promising it could happen before the end of the year.  The

drug treats scarring of the lungs and there’s been no cause determined yet as it affects 70-200k Americans.  As scarring builds up people lose the ability to breathe and eventually die.  There are no other treatments for this condition other than some off label use and the other option is a lung transplant.

Boehringer Ingelheim of Germany is also working on a drug to treat Idiopathic pulmonary fibrosis, which is the official diagnosis.  BD 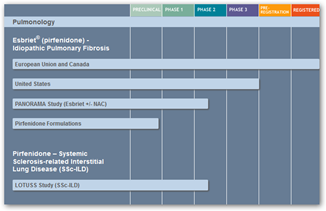 disease — for $8.3 billion, as pharmaceutical companies continue to seek new products to bolster their offerings.

InterMune, based in Brisbane, Calif., has one product on the market: a drug called pirfenidone to treat idiopathic pulmonary fibrosis, a fatal scarring of the lungs.