Home » Medically Related » My Commentaries » Other Items of Interest » Technology » The Four Models of Bundled Care - 3 Year CMS Algorithmic Patient Care Improvement Initiative, Yet One More Model To Enrich Health IT Profits With Complexities, Variables Will Kill This Model In Time…

The Four Models of Bundled Care - 3 Year CMS Algorithmic Patient Care Improvement Initiative, Yet One More Model To Enrich Health IT Profits With Complexities, Variables Will Kill This Model In Time…

This is a new initiative from Medicare and if you thought coding was complex now, wait until this kicks in.  Of course we all want to save money and provide better care and try to get away from fee for service and it’s tough to 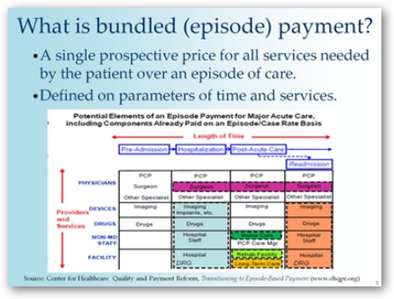 create a new model, especially when the existence of the old model depends on it as well as the elements used.  Of course ICD and CPT codes are here to stay but they do play a role here as having to know what codes initiate an episode.  We’re playing with more algorithms here, long and short of it.

You can read about the 4 basic models below and one is pretty simple but when you go beyond to the next levels is where the fun begins.  Now as a patient, you want to be sure you understand all of this right?  Just when you thought it couldn’t become anymore complex, well it does.  So now you doctor can explain to you if you are a one, two, three or even a four, but remember this will save money:)  Model three is after you go home.  The difference between one and four is that one is acute and four is just inpatient which will more than likely comprise most of the what concerns you.

Disputes are going to get interesting here too and they will come up and providers will quit or will be terminated as well.  So this is the next thing your doctor needs to be aware of with your care if they are a CMS participant.  It’s all about a math process that keeps the cost down and somewhere in her you’re supposed to get improved care, well that’s up to the humans after they figure out the process here as the algorithms are not be responsible for your care, they just do the formulas for the money:)

By the way did you know there are 38 government agencies that can fine or close down your doctor’s practice?  For many years it was four but has ballooned to this number in recent years so keep that in mind as well when your doctor is determining which bundle you are as well and which code needs to be entered.  This initiative will go for three years.  Here’s an article that talks about the extra nurses one hospital chain will hire to accommodate bundled payments on behalf of CMS as a partner.

You have to hire more humans to chase the codes around and audit everything as the “bundle” and you move through the process.  Frankly, I see this as a waste and little money saved as there’s too many variables for this to really work.  The model sounds good but not all models work in the real world and the Health IT folks are the ones cashing in here, with CMS buying in to it.  It’s more over all complexities and in this case MedSolutions make some money carving out a piece in the middle for some profit.

In the meantime maybe the hospital was paid a visit from MasterCard too and they are going to rummage through all your credit card transactions too and see what you have been up to there, if you bought any candy bars, etc. and so hey let’s dump this little profit machine right in there too, and now we have 2 elements built for IT profits but not better care.  CMS is not smart enough to see these other elements at work either, and that’s a given but it sure has an impact on the doctors and patients that have all of this headed in their direction.

As I have said before, link below “people don’t work that way” and we have a bit of quantitated justifications for things that won’t work that way.  This is just one more chaotic algorithmic process and model that will disappoint and drive everyone nuts for 3 years.  It’s not that hard to see in the making because it’s making an initial model more complicated and I’m guessing these might be some models CMS may have obtained from United Healthcare is it resembles pretty much what models you see coming from their studies and reports these days.

“The company plans to hire an unspecified number of nurses to work on site at hospitals as case managers, said Yvonne Daugherty, MedSolutions' vice president of marketing. MedSolutions has committed to cost savings of two percent from discharge to 90 days post-discharge and will be responsible for both risk and reward.”

Is it any wonder why doctors want to take back medicine?  The link below has some good videos that give you some insight into the other side of what’s happening today with doctors, maybe some stuff you are not aware of, but they are.  BD

“Taking Back Medicine”, Maintenance of Certification/Licensing, And the Haunting “EHR Trojan Horse”-Doctors Speaking Up…

Model One will apply to an episode of care encompassing only acute inpatient care hospitalization.

Under Model Two, an inpatient stay plus 30, 60 or 90 days of post-discharge service is covered. Payment results from a retrospective comparison of a budget with actual "fee for service" payments.

Model One will pay only for the services billed by the hospital. Model Two may include a bulk payment to a hospital and a rehabilitation facility.

The payment arrangement for Model Three is the same as Model Two, but only covers post-discharge care.

Practices should plan ahead for operating under such arrangements, focusing on certain provisions. First, understand rules that trigger, break or expire an episode. The payment contract should specify which CPT or ICD codes initiate each type of episode, what events may nullify the payment process, and when an episode has come to an end so that payments cease. Be clear about what providers and services are included in an episode budget.

Another issue to address includes learning how disputes between providers and payers can be appealed. Inquire into the mechanisms for resolving disputes among providers and pay attention to the governance structure of the provider network. It will influence decisions on qualifications for joining the network, adding new classes of providers, changing the formula for allocating bundled payments among providers or renegotiating the budget for an episode. Also, you will want to understand what happens when an episode costs more than what was budgeted as well as how risk is allocated among participants and what happens if a provider leaves the network in midepisode.

Finally, identify the process by which providers may voluntarily terminate participation in the network or be involuntarily terminated from it. Determine what steps will be taken if two providers claim the same share of an episode budget. Possibilities include simple negotiations or a decision by a tribunal.