Home » My Commentaries » Other Items of Interest » Technology » US First Privacy Technology Officer Resigns After Only One Year - More Proof That Lawyers Fail Running High Tech Government Agencies, Nor Can They Advance Any Consumer Interests

Here we go again, another lawyer ignorant of the fact that you have no index on data sellers and distributors in the US, so up comes another white flag as there’s no “data mechanics logic” here once again.  They just keep falling as nobody will 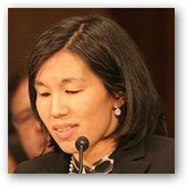 push Congress to pass a law requiring licensing which would create an index on who the data sellers are.  She’s not alone as we have Richard Cordray, same thing yet another lawyer with no “data mechanics logic” to get moving toward step one.  Seems like lawyers are looking for algo fairies as well.

Look at her background, legal products at Twitter and general counsel at Google, not what you need to look after consumer interests.  Look at the link below, she didn’t do anything to address situations like this at all, companies just selling consumer data like it’s going out of style.  Again if people in such positions can’t visualize where the data travels, the types of queries and algorithms used, they are useless and we suffer as consumers once again.

Sadly I predicted Richard Cordray would be another “Algo duped” lawyer doing very little for consumers other than going after the low hanging fruit as that’s all he understands while code runs hog ass wild.  Event the White House report, as weak as it was said Cordray needed to learn up in a lot of areas so why did they give him the job?

I looked at Wong’s Twitter feed, nothing of interest and little about work. Again another fail as she could not take step

one to create an index with data sellers and distributors as that’s what we need.

Transparency And Privacy Campaign - Need to License All Who Sell Data So We Know Who They Are - Why All Privacy Laws have Failed, We Have No Index…Please Help..

If you want to help me, I’m on it with a couple years work with communications with the FTC and Congress on getting a law passed to license data sellers and require disclosure on what kind of data they sell and who they sell to.  Use this link or click on the image for more information as all we get is a big fail for those who have “no data mechanics” logic.  BD

U.S. Deputy Chief Technology Officer Nicole Wong, who focused on privacy and big data issues, is leaving the White House a little more than a year after joining the Obama administration. Wong's last day is Friday; she will return to California where her family lives, the White House's Office of Science and Technology Policy said in a statement.

Prior to joining the Obama administration, Wong was director of legal products at Twitter and deputy general counsel at Google. At Google, she earned the nickname "The Decider" — a reference to the role she took in helping to determine when to censor results on the company’s search engine or clips on its YouTube video service that governments claimed ran afoul of local laws.

Sunday, August 17, 2014
My Commentaries , Other Items of Interest , Technology