Home » Medically Related » My Commentaries » Technology » AARP Creates New Tablet For Seniors, Let’s “Dummy Those Seniors & Baby Boomers Down” and Sell Some More Products and Services With A Tablet Born to Market…

My mother who passed away last year if she were still around would be insulted with this.  She did pride herself on on understanding the basics of working on a computer and actually helped other seniors and other non seniors who had questions.  Of course she 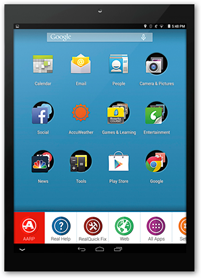 had me teaching her when she had questions but she did good on her own too.  This is why I say this is “dummy down” attempt here and it’s like saying “we know you’re not very smart so we created a real “dummied down” solution for you.

Seniors want to fit in and understand what the rest of the world is doing  and participate.  I do have to say this is kind of a slap in the face and of course if you order one you get a free membership for a year in AARP.  These will also be available at Wal-Mart soon.

Some of you may not feel the same I do on this, but I did watch a pretty funny comedy routine on this with the Tonight Show, again poking fun at this with “senior” icons created.  This is just a way for AARP to sell you more and if I were a senior, I’d feel insulted with this and I think AARP and Intel might want to do a “rethink” on how this tablet is seen.  You’re calling seniors and baby boomers “dummies”.

AARP does offer discounted services which some are good at discounted rates, such as senior home owner policies and and is the store front to sell United Healthcare Medicare Advantage policies.  Those two have been tied at the hip for a long time and maybe they had some input into developing this tablet?  I don’t know for sure and that’s a guess.    I still have not figured out what their Optum Labs deal is with United.

The specification state that there’s an accelerometer and gyroscope included so what else are we doing here?  There’s a broad statement that AARP doesn’t collect any personal data but how about the apps?  We’re back to square one with a big simple tablet that’s easy to use but there’s probably going to be some very complex privacy statements to try to understand for seniors, but oh heck, let’s skip all of that, what’s privacy:)

Again this is just my opinion and would have been that of my mother if she were still alive, “I can use a regular computer, don’t dummy me down and I’m not using Facebook either”.  Facebook drove my mother nuts as she did try it but the constant interruptions and distractions were not her thing at all and she preferred talking to her senior friends on the phone a lot better.  With Facebook and Mom it was not the other seniors driving her crazy but rather folks who are not seniors filling her page with junk and bugger her constantly.  BD

Called RealPad, it’s bigger than a smartphone yet smaller than a laptop computer. The tablet was designed with tech-shy people in mind, AARP says, making it easy for them to keep in touch with family and friends — including their grandkids, for whom the art of letter writing is often a lost cause.

RealPad “fills an unmet need in the technology marketplace,” Jenkins says. AARP estimates there are more than 35 million people over the age of 50 today who are online but not using tablets because they find the technology confusing, intimidating or too costly.

AARP’s device is powered by chipmaker Intel and uses the Android operating system. Among the tablet’s many features are free 24/7 customer service support with a live expert, pre-loaded how-to videos and a free one-year membership to AARP, the nation’s largest group advocating for older Americans. The device has a 7.85-inch screen,  a 2.0 megapixel front-facing and 5.0 megapixel rear-facing cameras and 16GB of memory. The retail price is $189.