As you can read below there’s a lawsuit that’s pending regarding payments filed by the hospital a few years ago.  Basically the hospital is saying they are not paying adequately.  All physicians would be out of network and again would this be a double whammy for the Medicare

Advantage patients, some of which have already had their primary doctors fired.  If you read the link below you can see where United is working to match patients up with new doctors but the algorithms are doing funny things and giving patients OBGYNs and Neurosurgeons as their new primary care MDs.

A couple more weeks and we shall see if they walk away from the Medicaid contract and the rest that also follows.  BD

The Chattanooga region’s largest hospital system may soon be out of network for thousands of patients with UnitedHealthcare insurance if a bitter dispute with Erlanger Health System over payment rates is not resolved by the end of the month.

Erlanger officials say the current dispute, which centers on a contract with United’s Medicaid product, is the final straw in a long-strained relationship between the public hospital and the for-profit insurer.

If a deal is not reached, children and pregnant mothers who have United insurance through TennCare 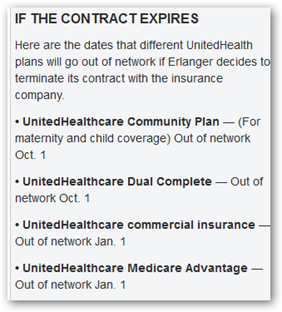 will be out of network on Oct. 1. Erlanger has the area’s only children’s hospital.

But Erlanger officials say the partnership has never been smooth.

“No other insurer has been this difficult to work with,” Erlanger CEO Kevin Spiegel said.

For patients who have United insurance through their employers or through Medicare Advantage, Erlanger would be out of network as of Jan. 1, 2015. That would include all of Erlanger’s affiliated physician groups and community health centers.

United has been paying “pennies on the dollar” of what should be standard for its TennCare patients, Erlanger argues, and repeatedly denies the hospital’s claims. The hospital sued United over this issue five years ago, and the litigation is ongoing.

Hospital officials say they made an offer that was about 75 percent of the highest possible reimbursement. United rejected it.

Erlanger is the third-largest TennCare provider in the state, and takes the highest percent of TennCare patients in the region.

“They are willing to walk away from the entire Medicaid population in East Tennessee,” Spiegel said.

United’s gross profit from TennCare was nearly $422 million in 2013 and $490 million in 2012, according to an equities analysis by CitiBank.