Let’s hope this get some action as the momentum after a successful Meaningful Use Stage One is beginning to fall off.  Some have told me they have just about given up.  Technology is to blame for some of this and frankly the ONC is overwhelmed with complexities due to some of that along with other things happening in the industry.  90 days is a much more reasonable amount of time as hospitals and doctors are very busy today with a lot on their plates.

One hospital in Arkansas received an audit and is asked to return $900,000 based on the fact that they did 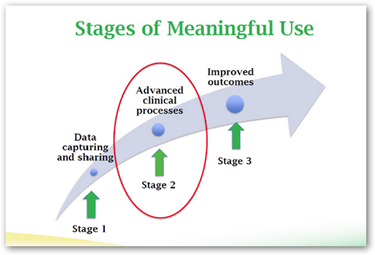 not do a risk assessment for their Meaningful Use Stage one incentives.  There could be more of these.  They were one of the very early adapters and are planning to write an appeal.

In addition there was the hardship extension which is throwing a bit of confusion out there with again the versions of meaningful use and software used.   It was confusing and I think some didn’t think they needed it when in fact they may have.  In just the simple summaries I write here it’s an effort to keep up on all the rules and regulations.  Hospitals can use the 2011 Edition certified EHR technology or a combination of 2011 and 2014 Edition certified EHR technology for the 2014 reporting period.  Doctors can attest under the 2013 reporting year and use the clinical quality measures from 2013 and will not get a penalty for not moving to meaningful sue Stage 2 during 2014, ok so did you get all that?

Doctors using older medical record systems have until October 1st to report.   For those that miss a 1% reduction in Medicare payments will be assessed.  I have heard a couple of doctors tell me, it’s easier that way to take the 1% hit but for hospitals, that could add up to big money.  Less than 4% are certified for meaningful use two so far and doctors are at 1.3 percent, so sounds like there’s a few handing in the towel here and taking the hit on the payments.  Hospitals on the other hand are working to get this done by the end of the month to start collecting data.

This just grew to be way too complex after Stage One and again it’s another distraction, with big money attached that takes away from caring for patients.  Stage One was a big success and the rules were pretty clear.  Will there be a stage three, time will tell but I think everyone is tired of Stage Two and wants to move forward and get it out of the way.  This is not how things started with the entire program but as it progressed, a real big mess with CMS and technology entering in here just blew the models out of the sockets and they are not working too well right now.   It’s a mess to even sort out at the ONC I would think as there’s a lot to working with models that have variables that change very frequently and as we see here, they can fail very quickly as well.   BD

Doctors and hospitals hoping the US Department of Health and Human Services will amend its 2015 reporting requirements for Electronic Health Records may get help in the form of legislation.

Rep. Renee Ellmers (R-NC) this week introduced HR 5481, “The Flexibility in Health IT Reporting Act of 2014.” The bill would reverse HHS’s decision to keep a full-year reporting period for its EHR incentive in 2015, replacing it with a 90-day reporting period. Providers have asked for asked for a shorter reporting period because they say the vast majority of doctors and hospitals aren’t prepared to meet Stage 2 Meaningful Use standards by their deadlines.

“The Meaningful Use Program has many important provisions that seek to usher our healthcare providers into the digital age,” Ellmers said, in a press release. “But instead of working with doctors and hospitals, HHS is imposing rigid mandates that will cause unbearable financial burdens on the men and women who provide care to millions of Americans.”

The bill has attracted 3 co-sponsors, including one Democrat, Rep. Jim Matheson of Utah. Many of the organizations joined the letter to Burwell have also come out in support of Ellmers’ bill.