Sure there are still doctors who run private practices that see pharmacy reps but with more doctors working for hospitals directly or with a group that is specific to a hospital, the MDs no longer are in control of making the decisions on what drugs can be prescribed. 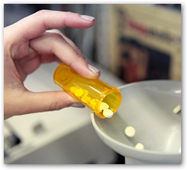 We know what this is all about of course with hospitals, it’s about cost.

Physicians are given a menu of which drugs they can choose from.  Today 42% of doctors practice on a salary with hospital systems.  Drug reps now are making more calls on hospitals than ever before.  Key account managers from drug companies are growing too as obviously now there’s more than one drug being discussed at a time with bigger pharmaceutical companies.  When new drugs are released, now the pharma reps run to the hospitals first for the big sales and then later to independent doctors.  This might take some of the pressure off of the pharma expense accounts too with not soliciting a doctor directly and they can spend more.

More doctors are joining healthcare systems as negotiating with insurers has also become difficult.  Interesting point made in this story that I was not aware of which is that Medicare will stop or cut payments for COPD drugs if it doesn’t stop enough people from returning to the hospital.  I do have to ask what kind of formula is that?  I am guessing though this means the name brand expensive drugs.  One thing though is that hospitals do have the power to drive down the cost of drugs with this type of program versus one doctor.  Doctors are pretty much following the protocol and it makes sense they would unless there was one or two unique patient situations to where something would need to be discussed, etc.  BD

SAN DIEGO—Kendall French used to pitch drugs to doctors who could prescribe them.

But many of those doctors now work for hospitals that don't give them final say over what is on the menu of medicines they can pick. So when the GlaxoSmithKline GSK.LN +0.27% PLC saleswoman began plugging two new lung-disease drugs to a big San Diego hospital system this spring, it was to an administrator who doesn't see patients but helps write the menu, also called a "formulary," of approved medications.

Ms. French urged the administrator in the system, Sharp HealthCare, to consider the two drugs' effectiveness. It was the kind of pitch she once used to persuade doctors to write prescriptions.

The administrator, Electa Stern, said she would run the effectiveness data by doctors who are helping decide what to put on a systemwide formulary. "And then we will be taking a look at cost." There are about 2,600 doctors in the Sharp system.

One such market is San Diego. The Sharp health system, with nearly $3 billion in projected 2014 revenue, runs seven hospitals, three nursing homes, five urgent-care centers, two medical groups and a health plan in the area. The system, which is midstream in its shift toward standardizing patient-care procedures, has in recent years been creating systemwide formularies.