Here’s yet another update on what Zoeticx is doing with their Clarity Server based platform.  We all know and talk about how 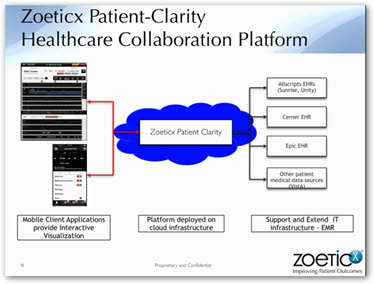 HIEs are expensive, take a lot of time to build and then of course the cost of sustaining them long term.  Zoeticx has different plan that allows for interoperability of EMRs to work without that burden.  You would have to be living under a rock today to not be hearing about the focus of interoperability today.  There’s a a few other cloud platforms in the works or a few that are working but they too again require synchronization of the medical records of those participating.

What doctors are calling for today is “less disruption” and the video below is an explanation from Dr. Don Voltz on how Zoeticx answers those issues.  When interoperability works and records are shared, that’s a good thing and we have some of that happening across the US but it’s not everywhere, which is the goal of all hospitals, doctors, being able to collaborate and share medical records.  So far Zoeticx has built 4 applications to work on their Clarity server and has APIs built for Allscripts, Epic and a java based API.

Allscripts has a page on their application “store” to where you can explore more about how Zoeticx would sit top of their medical records system.  Again, Zoeticx just needs the API created and any medical records system can use the platform.   So basically anyone with Allscripts or Epic has the API built and ready to go, and then can build any other web applications t go along with the basic interoperability apps that are already included.  Apps for the Ipad and IPhone are available for download at the ITunes store and of course they are not going to do anything until they are configured to work with a Zoeticx server but they are readily available.

The four apps already designed to work on Zoeticx include CareIntelligence, CareSynergy, CareCompliance and CareHistory and you can read about them on the website with descriptions of how they work with the Zoeticx Clarity Server.  What you can see in the video is the nice common user

interface created at each end with using an inpatient/outpatient collaboration as an example.  If if an physician is a “lagger” and doesn’t have a medical records system yet, they can still have a “registered” device and collaborate and actually that’s not a bad thing as it could motivate them to maybe be even move from paper records a little sooner too.

The company also has a proposed ONC 3-6 year timeline and as they state, “it’s available now” to get started.  I agree with them on leaving out the 10 year roadmap as it’s just too far to be able to predict as technology rules that today and just look at how fast Meaningful Use changed and the number of changes, etc. that had to take place there in a short time, so yeah, 10 years, we can’t get there quite yet.  The link below has some additional information, videos and a further explanation on how Zoeticx works.  I’m writing about this as I’m looking at money and the savings here with not having to build more warehouses to sustain data to allow collaboration is staggering.  From what I am reading here this could hook up and connect the DOD and VA too, no matter what level they are at with current legacy systems or adding new modules or medical records system and could sit there and allow collaboration while what ever they decide to do occurs, in other words interoperability  opens up while other work in progress takes place.  Clarity server is not new and as a matter of fact several Epic users have one, like Kaiser that works with their medical records systems to provide reporting services and and synchronization of data.  You can can search that out and see what Kaiser has done with developing their Clarity server but again it still has to synch with their configuration, so again we come back to this is w

I keep reading about interoperability and the involvement of Congress and I don’t think they really get the entire picture at times, but that’s no unusual or unique either as I think we could discuss that matter all day but the idea here is to take the interoperability chore from the medical records and kick it up to a platform.  Sure there’s been a lot of work with being able to create continuity of care documents and more and those are good things too by all means and are used but I have read too where most medical records can produce them, but others have issues importing them and thus so we come up with “EMRs that do not allow interoperability” in the terminology we hear out there.  It’s not usually the “bad guy” medical records system doing this on purpose as there’s a lot of time that goes into writing code but like anything else it’s getting different data sets, mapping and coding to work with each other.  There’s no “bad guy” EMRs out there doing this on purpose, it’s the data world and you can reflect back on Healthcare.Gov if you want talk about data sets, code and interoperability as there’s a lot there that’s not fixed and all working as the “perception” was created.

Here’s a couple words from Zoeticx:

HIE is not the solution for interoperability. Adding additional database layers, creating more interfaces, point solutions are not the outcomes for professional. They want some simple things:

I sit here every day, and being a very early medical records developer who quit when all went to the web and look at what’s going on out there with the big picture and I’m seeing a lot of proof of concepts falling on their face as we seem to have this big “data grab” going on out there and maybe missing the point of the word “relevant”, in other words what kind of data, and where do you need it to collaborate and make good solid clinical decisions?  I think that’s a good question for all to ponder here and there as you can flood yourself on data overload and software and jumble up a good system if your are not careful.  It’s hard and not easy to create user friendly interfaces today as well, as that too gets to be complex and Zoeticx 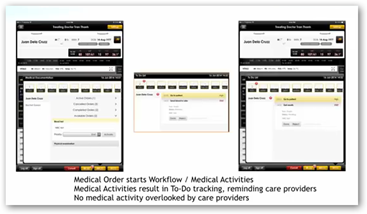 seems to have answered that issue with the same user interface on an Ipad appearing on both side, so everyone sees the same thing, that’s huge value right there.  We’ll still have various medical records system out there for years but when it comes time to collaborate and give good patient care, the same interface and data is seen at both ends and to me that’s a big deal and I’m sure there’s some real appreciation from doctors with this point as well.

The video is from Dr. Don Voltz as seen through his eyes in telling you where he sees the value and how it can give value to his workflow.  Be sure you have a little bit of time to watch the entire video as it runs a bit over 28 minutes. Again you see workflow and the timely ability to take action on patient care.  There’s no duplication of data and the connection the back end of the data bases is the key that keeps the cost down and the system functioning efficiently.  The platform can be provided on both mobile and on desktop systems.  Information is not lost or missed with a consistent interface that will help with reducing errors.  Care providers can build teams and determine who will be accountable in which areas and again all members can be updated.  This is important as how many times have we discussed “patient handoff” with teams and something getting missed.

A primary care physician would be able to follow the history and care of a patient while hospitalized for their care, even though not directly involved in some of the decision making at the hospital, in other words the primary care MD is not left in the dark.  That’s a big deal as sometimes 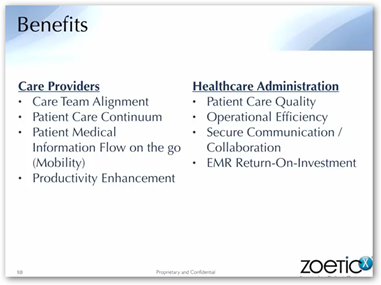 the Primary Care doctor is the last one to know that a patient has been admitted to the hospital, and I have heard that on many occasions from doctors first hand.

Again the value here too is the fact that Zoeticx sits on any medical records system and it can save doctors a ton of money without having to rip and replace their current medical records system.  The ideal configuration would be the server in place at a hospital with all the devices, EMR Gateways in place to allow for interoperability. Doctors in private practice today who maybe were early investors with medical records are all pondering, do I need to upgrade to interoperate and spend more money?  Well with the Zoeticx platform that allows for some flexibility there with such decisions and all might be able to just keep their current systems if they are indeed doing what is needed and required.  Moving up to a platform takes a huge burden of interoperability off the shoulders of medical record vendors as well.

Also you see a hospital that may have one EMR vendor system in the ER, but the rest of the hospital uses another system, so again what a great way to marry the two in house as well as building the rest of the interoperability to communicate with other hospitals and doctors.  Again the design here with the Zoeticx Clarity server is what is unique out there with eliminating the expense of building more data warehouses, and yet allows for true collaboration of physicians and doctors anywhere. There’s a lot of specialty medical records systems out there too, like ones for Oncology and Google just tossed some money at one of them and so how do these fit in the over all medical records scheme?  Well if you have a platform, they can fit in just fine to collaborate with an API written.  Hey Larry Page, tune in here with your acquisition of Altos Oncology solutions via Flatiron (see link below:)

Google Ventures Invests $130 Million Into Health Technology Company Flatiron, Yet One More MD Decision Assisting Platform and Back Doors It Into the Medical Records Business As Flatiron Will Acquire Altos Oncology Solutions

The saving this creates is huge and when I think of what my tax dollars are going for with the VA and DOD and their systems, well they should at least give this a look themselves.  I have seen the extensive work both agencies have done in Hawaii with a common dashboard and there’s a lot to be said for all that time and effort as well.  Sometimes folks get the impression that the VA and DOD are sitting on their hands, and that’s not the truth at all.  So again I would think they too would want to take a look at Zoeticx and they are all in the same quest to save money and provide better collaborated clinical care for patients.  BD