Below is a video from UCLA from a patient who enrolled in the trial and how it changed her life and got her out of a wheelchair.  Keytruda is designated as a “breakthrough drug”.

Kathy Thomas, 59, of Torrance, California, was diagnosed in September 2011 with melanoma that had 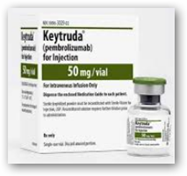 spread to her liver and was invading her left breast. She underwent several therapies that did not work, and she was weakening fast.

"I lost weight. I threw up nearly every day," Thomas said. "My hair was thinning. I just had no strength at all. I was so sick I had to use a wheelchair."

Thomas met with Ribas in 2012 but was skeptical about enrolling in a trial to test an experimental therapy. She soon overcame her hesitation.

"I decided I wanted to survive," she said. "I wasn't going to let this disease beat me."

Since enrolling in the study, Thomas' tumors have shrunk. She regained her strength and her appetite. She's out of her wheelchair and walking normally again. She said she has experienced no side effects from the therapy, and she travels monthly to San Francisco to visit her grandson.

"I just enjoy life now, really enjoy it," she said.  For more information about Keytruda clinical trials at UCLA, members of the public are invited to call 888-798-0719.

Her story above is about melanoma that had grown and was moving in her body.  Keytruda is marketed by Merck.  The drug also has the potential to treat other cancers that the immune system can find.  25% of the folks in the trial saw their tumors shrink.

The U.S. Food and Drug Administration today granted accelerated approval to Keytruda (pembrolizumab) for treatment of patients with advanced or unresectable melanoma who are no longer responding to other drugs.

Melanoma, which accounts for approximately 5 percent of all new cancers in the United States, occurs when cancer cells form in skin cells that make the pigment responsible for color in the skin. According to the National Cancer Institute, an estimated 76,100 Americans will be diagnosed with melanoma and 9,710 will die from the disease this year.

Keytruda is the first approved drug that blocks a cellular pathway known as PD-1, which restricts the body’s immune system from attacking melanoma cells. Keytruda is intended for use following treatment with ipilimumab, a type of immunotherapy. For melanoma patients whose tumors express a gene mutation called BRAF V600, Keytruda is intended for use after treatment with ipilimumab and a BRAF inhibitor, a therapy that blocks activity of BRAF gene mutations.

“Keytruda is the sixth new melanoma treatment approved since 2011, a result of promising advances in melanoma research,” said Richard Pazdur, M.D., director of the Office of Hematology and Oncology Products in the FDA’s Center for Drug Evaluation and Research. “Many of these treatments have different mechanisms of action and bring new options to patients with melanoma.”

Keytruda’s efficacy was established in 173 clinical trial participants with advanced melanoma whose disease progressed after prior treatment. All participants were treated with Keytruda, either at the recommended dose of 2 milligrams per kilogram (mg/kg) or at a higher dose of 10 mg/kg. In the half of the participants who received Keytruda at the recommended dose of 2 mg/kg, approximately 24 percent had their tumors shrink. This effect lasted at least 1.4 to 8.5 months and continued beyond this period in most patients. A similar percentage of patients had their tumor shrink at the 10 mg/kg dose.