Home » Insurance » Medically Related » My Commentaries » Other Items of Interest » Dr. Oz Says “Enough is Enough” As He Volunteered at the CareNow Free Clinic In Los Angeles “Failure of Basic Morality in the US”

Dr. Oz Says “Enough is Enough” As He Volunteered at the CareNow Free Clinic In Los Angeles “Failure of Basic Morality in the US”

The CareNow Free Clinic got off to a rocky start but it looks like Dr. Oz had to be here as a consultant as California did not get the provisions implemented to allow doctors to travel over state lines to volunteer here.  The Medical Board messed up and had over a year to get this set up.  At any rate Dr. Oz was there and he wrote about his experiences with a couple of patients. 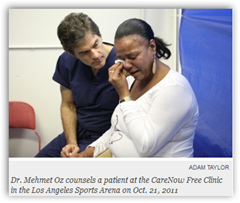 it easier for out-of-state medical personnel to assist with future events.
But just over a week before the massive clinic returns, the state has failed to adopt regulations needed for the additional volunteers to participate. As a result, only medical personnel licensed in California will be able to treat patients and some people could be turned away. It also means Mehmet Oz of "The Dr. Oz Show" won't be able to see patients at the clinic as planned, though he can serve as a consultant.”

Dr. Oz and the Uninsured Lose Again–Free Clinic Coming Next Week to Los Angeles–State Board Has Had Since September of 2010 To Implement Law To Allow Doctors To Cross State Borders to California to Volunteer-Failed

Dr. Oz concludes his comments making a couple good points, dignity and the chance to be healthy are vanishing in the US and it’s time to do something about it.  He also states his lack of confidence and disappointment in the politics and how it’s killing people like the woman he counseled with late stage breast cancer who had lost her job and had not been able to see a doctor for a couple of years.  What if this had been caught sooner?

The insurance industry and the ability to cover and pay gets worse every day and I report it here on the Quack and do have to agree, time for single payor system as enough is enough.  BD

The smell was unmistakable. I recognized it immediately – a fungating infection. It’s what happens when a cancer breaks through the skin and the puss oozes out and aerosolizes, producing an unsurprisingly foul odor. This is what late-stage cancer looks like if left unchecked, like many cancers were 100 years ago and still are today in the developing world. But I encountered this case this month, and Yvonne, the woman who sat crying before me, lives in Los Angeles. She lost her job two years ago, and when her insurance expired, she was too ashamed to seek help for a mass she felt in her right breast. Now the tumor had replaced her entire breast and blasted through the skin. Being cared for now — so late in her illness — was surely not what she would have wanted; and just as surely, it could have been avoided. How did we let this happen in America? 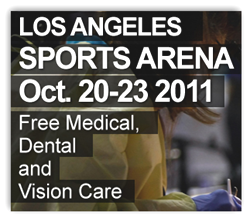 I was volunteering at the CareNow Free Clinic in the Los Angeles Sports Arena, where more than 700 doctors, nurses and health professionals had turned out to serve the local community. CareNow is a nonprofit founded to bring medical care to underserved communities, and the Los Angeles event was organized by Don Manelli, the indefatigable president of the group. He was aware of what we would see that day, as was I, having volunteered at similar clinics in Little Rock, Ark., and Moorsville, N.C. We also conducted our own clinic for The Dr. Oz Show in Houston in 2009 and saw more than 1,800 patients in one day. But simply having been down this road before does not mean you’re ever fully prepared for it.

It’s this tide of disease and despair that CareNow exists to fix. The group was informally established by a team of first responders who’d learned the art of swooping in to help after hurricanes, earthquakes, wildfires and tsunamis. In May 2009, they held the largest free clinic ever, also in Los Angeles, and a breathtaking 8,000 people showed up. After that, CareNow was formally founded, with the goal of providing care when there is no natural disaster. And on an otherwise unremarkable Friday afternoon in the fall, I was a small part of that effort, gently offering what encouragement I could to a weeping Yvonne.

But we’re not perfecting the law; we’re fighting over it. Politicians dither and people die. Lawyers argue the merits of this or that technical point, and more blameless Americans grow sick and slip away. This isn’t just a failure of politics and policy; it’s a failure of basic morality.