The results of a clinical trial showed the results compared to the use of a placebo and benefits were not attained.  It is the only drug on the market to treat Sepsis in 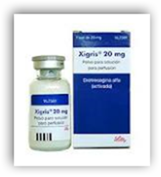 this manner.  The drug was approved back in 2001 so it has been around for a while and thus I’m sure many were given the drug.

All treatments currently being given to patients should be halted and the product returned to where it was purchased and no new patients should be given the drug.  I have to agree with another blogger, the Happy Hospitalist on his statement below:  BD

“I would personally like to take this opportunity to request the FDA and Eli Lilly remit payment for all hospital expenses previously incurred by using this apparently worthless $10,000 per 72 hour infusion drug.”

Eli Lilly has announced that the medicine Xigris is being withdrawn from the market because a study conducted showed that, after treatment with Xigris, no statistically significant reduction in mortality among patients with severe septicemia was noted. Xigris is still the only medicine approved for the treatment of severesepticemia. The recently concluded study was launched by Eli Lilly in 2008 andsought to help improve the selection of patients with severe septicemia fortreatment with Xigris; this was not achievable, possibly due to the selectionmethod used. We are not aware of any use of BioPorto's selection method (theAPC-PCI assay) in the study conducted by Eli Lilly.

The results of the published study, and the withdrawal of Xigris from themarket, show there is a very great need for a selection method to selectpatients with severe septicemia for treatment. BioPorto's APC-PCI (ActivatedProtein C/Protein C Inhibitor) test, which in a smaller study was demonstratedto be suitable for the selection of septicemia patients for treatment, willtherefore be even more relevant for the correct selection of patients withsevere septicemia, either in terms of bringing Xigris back to the market orwith a view to developing new methods for the treatment of severe septicemia.Several noteworthy studies are currently in progress with a view to developingnew treatments of severe septicemia, and accurate patient selection will bedecisive in connection with the development of new therapies.