This looks really nice for patients who need regular injections of either cancer or antibiotics.  I have seen similar ports but they are something that kind of hangs out

of your body and this way the port is covered and shows a “bump” to find.

This has to also be a benefactor for fewer infections areas too.  The incision space is smaller and easier for the patient since it is under the skin too so you can shower or whatever without worrying about knocking an object or anything attached to you out of place.  BD

Stealth Therapeutics, a Fitchburg medical device company, got the go-ahead from regulators this week to start selling its first product: a port inserted under the skin for use in patients who need long-term 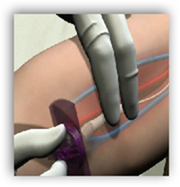 Developed by Dr. Bradley Glenn, an interventional radiologist formerly in Green Bay and now in California, the polyurethane Invisiport has been under development for two years, says Stealth CEO Peter Drumm.

It's different from other devices already on the market because it's smaller; goes into the arm instead of the chest; requires less anesthesia; and leaves a smaller scar when removed, Drumm says. The patented design has "wings" that rotate when the Invisiport is in place, keeping it stable.