Back in July of 2010 Microsoft announced that the HIS System would no longer be sold in the US but rather would be sold outside of the US.  Microsoft’s Amalga Business Intelligence aggregation though is still well and alive and in use in many hospitals in the US.  As I understand here as well is that Microsoft and Orion will together market that portion of the product and thus it would be available both inside and outside the US.  Officially it is called the Amalga United Intelligence system that can rid on top of an existing medical record system.

If you want to go back in time you can see where I did a video, actually a nice phone video in person with the CEO of Bumrungrad and Nate LeMore from Microsoft who are both mentioned here.  I was at the first Medical Tourism conference here in Los Angeles. At that point in time we were talking about using HealthVault and taking your records should one decide or need medical services over seas. 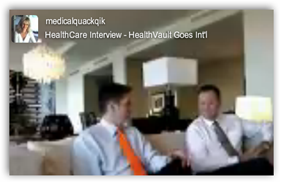 You can read the full press release here.  Amalga was actually born in the US and was developed on the east coast in the US and you can read more about Dr. Craig Freied below and see what the Freakonomics guys had to say too, very entertaining and interesting.  BD

From the website:  “Orion Health has offices in the United States, Canada, United Kingdom, Spain, Australia and New Zealand, and our growing network of partners includes leaders in technology and services such as Accenture, Cisco, IBM, Initiate and Oracle Corporation.”

Amalga HIS was developed at Thailand’s Bumrungrad International hospital by Global Care Solutions and was acquired by Microsoft in October 2007. It  offered 50 clinical and administrative applications (including lab, medication management, RIS/PACS, electronic medical records, CPOE, clinical documentation, financial management, and HR management) that were used by seven Asia-Pacific hospitals. Microsoft announced that it was ceasing ongoing development of the product in July 2010, but would support existing customers for five years.