The center is aggressively looking for a buyer to keep the doors open.  If a buyer is 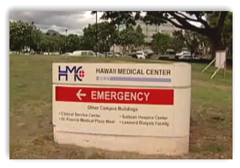 not found they could begin moving patients to other facilities in November.  The hospital is also turning to the government for potential help with emergency actions.

The hospital has already gone bankrupt and there is too much debt so the reorganization won’t work.  BD

HONOLULU -- Hawaii Medical Center West treats a population stretching across Leeward Oahu and the Ewa plain, with patients also traveling to HMC East in Liliha. The financially ailing hospitals are aggressively looking for a buyer to take over from Saint Francis Healthcare System. Sen. Will Espero said if the hospital isn't sold by early November, it is in jeopardy of shutting down.

“This was one of the most difficult decisions we’ve had to make. We were all hoping for a better outcome, but taking on these financial responsibilities would put our current programs and services at risk and become a burden on our mission of creating healthy communities in the Spirit of Christ’s healing ministry.”