Painless needle free flu shots, the FDA says they may not work due to the fact that they have not approved “injector devices” for the shot.  If you got one of these from a drug store or elsewhere, you might need another one. 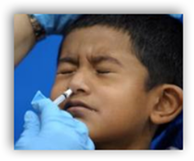 Pharmajet, the company who makes the device has FDA approval to use for delivery of other drugs, but apparently it’s not a delivery method for flu shots.  There could be something to this as a vaccine has different properties and is not like an antibiotic in the way it reacts as one simple example.  Kroger doesn’t know what to do now and is looking to the FDA, can we do it or not with flu shots.  There’s also another company Bioject who makes a similar device.

When all else fails, snort it as there is one that you can inhale until this dispute is settled.  BD

For this year’s flu season, many pharmacies are for the first time offering painless, needle-free shots to ward off the disease. But there’s one big problem: The FDA says they may not work.

The agency on Friday warned doctors, nurses and pharmacists “not to use injector devices to administer influenza vaccines.” The agency’s alert notes it has not approved any “injector devices” for use with the flu vaccine.

“The FDA has no data to support the safety or effectiveness” of flu vaccines delivered by jet injector, the alert reads.

So patients who already received the shot may need to go back and get a jab in the arm with a needle after all.

PharmaJet, a Colorado-based company, has been marketing its device as a proven flu-fighting tool.  In place of a needle, PharmaJet uses a high-pressure steam of liquid to pierce the skin and deliver the vaccine.

“PharmaJet’s needle-free injectors have received FDA marketing clearance for use with liquid medicines and vaccines and are available throughout the United States,” company president James Bowman said in a recent press release.