Home » Medically Related » My Commentaries » Other Items of Interest » Technology » Privatization of American Science Taking Over In the US, Tax Havens Certainly a Question Here Too, Government Doesn’t Decide Anymore What Is Funded, Huge Stashes of Cash For Billionaire Philanthropists To Spend How And Where They Decide…

Privatization of American Science Taking Over In the US, Tax Havens Certainly a Question Here Too, Government Doesn’t Decide Anymore What Is Funded, Huge Stashes of Cash For Billionaire Philanthropists To Spend How And Where They Decide…

This was a very good article and video produced by the New York Times and one that makes you stop and think as this has been progressive with government funding getting lower all the time.   You read it every week with the NIH looking for more money to fund research.  Sure private funding is always welcome along the line but when you look at where the efforts are coming from, these are the exact same companies with tax havens to avoid paying US taxes, and of course with taxes, some of that money goes to science research.  Tax Havens are not

illegal but they are certainly not ethical unless you are the corporation not paying taxes in the US and then more than likely the lobbyists there will defend it to the end as it’s money and profits.  If you have not seen how this works, the video at the link below does a good job and sure the big players are all there, Google, Apple, Wal-Mart, United Healthcare, 3M, banks and lots more.

“The tax free tour” Documentary on How the Tax Havens Work, Who Runs and Owns Them, How Accountants Are Taking Over the Regulators And Not Held Accountable…

Kind of a strange situation is that big corporations can break with ethics and make bigger profits by avoiding US taxes and then return as heroes being philanthropists, after all it would really look bad if they didn’t give “anything” back, right?  Everything they fund too is not a waste by any means but rather now instead of the government being in the driver’s seat, it’s corporate USA, doing what “they” want instead of working “with” the government as a partner and rather leading into dictatorship in some areas, we see this in healthcare and it exists everywhere.

With science it is ok to fail and failures do happen but when there’s money at stake with profits being so much in the forefront today, the pressure for scientists increases as well and you end up with a lot of “fake” work and studies and just flat out lies in the name of either pressure or their own self greed too at times.  That’s sad and scary in healthcare too as others build on the science and you can have wasted years and time all over the place and sometimes the scientists never get caught.  We have a lot of “self policing” going on there with replication of studies and that’s a good thing too as I think in science there’s enough of a competitive spirit there along with “doing the right thing” that there will be challenges all the time and we need that to separate the fake from the real or the non-significant from the real.

When you watch the video, you see Frances Collins, head of the NIH saying 2013 was the worst year ever on funding, and things that used to be considered a “hands down” yes in the past, get zero funding.  There are still companies and organizations that of course work with the NIH and back in 2012 there was a Milken “Celebration of Science Day” to generate more private funding contributions to the NIH and to promote “working together” and not so much as we see today which seems to resemble competition at times. 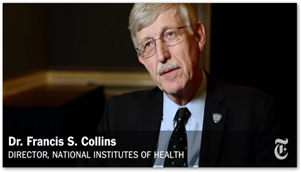 companies haven’t tried with Congress for example.  For years Bill Gates makes an annual trek to testify and he’s always well received and usually gets a “thank you very much” and as soon as he leaves, nothing changes.  I mention the digital illiteracy and lack of technology understanding all the time here on my blog and why we are so stuck, as those folks are “so stuck” and have some very strange perceptions on a lot of topics, and they see things as they only seem to affect them, rather than the big picture.  I keep talking about restoring the Office of Technology Assessment for all of these so we could hear less Dr. Seuss from the likes of Ted Cruz for one, and he’s the poster boy for that effort right now.  I sit here and wonder about things like the Sebelius Syndrome myself and talk about it and can’t help but think the billionaires are doing the same thing except they have money and power to control it.  The technology companies live in an entirely different world than goes the perceptions of many of those serving in Congress.  Myself during the fake Cruz filibuster I got on the Twitter feed that day and picked up about 4 more members of Congress following me on Twitter with “intelligent” tweets that got attention, not talking about abortions or that crap again but rather tweets relating to technology answers and questions.

Look no further than here with the Life Sciences Breakthrough Awards if you will.  There’s not partnership here with the NIH or government and you can’t blame scientists here as they were just doing what their passion is and then got a lot of money for it.  I’m not condemning this but there’s no partnership but rather it’s like competition if you will with the government and this certainly had no impact on Congress as I doubt if they even thought of what perceptions were outside of their own little worlds.    Being Mark Zuckerberg is the head of the group, well there’s some immaturity in thinking there as well and we have seen that this week with him calling the President on “privacy” concerns, which is kind of like the kettle calling the pot black if you will.  You can read about Zuckerberg partnering with a bank, Barclays to fund writing code in the UK, but again not much with the government on a partnership level if you will.

So in essence the billionaires with the money are running the show, not paying taxes and

being the philanthropists for the most part doing it “their” way.  I see can see their frustration though to big degree with Congress as you just can’t get through those thick skulls sometimes with their perceptions and everyone laughs as they go back to abortions over and over as that’s the default topic anymore to argue about rather than getting smarter, and that is flat out scary to see that this is some of the highest level functioning we get from some of them with lawmaking.

Then again, Larry Ellison, CEO of Oracle who’s mentioned in this article talking about “artificial intelligence” is also smart enough to give the fair warning too on how some this crosses the line as well with people confused in not knowing where the virtual world leaves off and the real world values kick in and that’s another side to some of the issues out there today.

Bottom line though is the need for a better partnership here and working together with government and private industry as the article mentioned the US government doesn’t even track what’s going on with private philanthropy which does not make sense at all.  So the big fear is that corporations are international, and they could move somewhere else so working at partners is the real win-win here and not being competitions.  Again you can see a “digitally ignorant” Capital Hill playing their role in letting this develop over the years too and next time abortion comes up, well think of this article what that represents by comparison, nothing really, just a bunch of old guys wanting to control something while what needs to be worked on with science just slips away.   Here was my idea a while back on how to generate more funds for the NIH and FDA and attack the “data selling epidemic” (another issue that has floated on by a digital illiterate Congress and FTC).

So the pendulum swings both ways and if the greed and profits as is everything else today takes the main focus, well more cheating scientists might be showing up along with the good stuff that gets created, we do need some checks and balances throughout the entire process for sure.  Below are a few paragraphs where some of this relates to healthcare.  If taxes can be avoided and then the same folks return as philanthropists and the NIH starves for money, well you get the idea, there’s one big model that should be created to it all works out for the good of everyone and not just bigger profits for corporations and banks, which is what we need, for “everyone” to win.  BD

Last April, President Obama assembled some of the nation’s most august scientific dignitaries in the East Room of the White House. Joking that his grades in physics made him a dubious candidate for “scientist in chief,” he spoke of using technological innovation “to grow our economy” and unveiled “the next great American project”: a $100 million initiative to probe the mysteries of the human brain.

Medical institutions are even training their own scientists and doctors in the art of soliciting money from grateful — and wealthy — patients. And Nature ran a lengthy article giving tips on how to “sell science” and “woo philanthropists.” They included practicing an “elevator pitch” — a digest of research so compelling that it would seize a potential donor’s attention in the time between floors.

“It’s always been a major worry,” said Robert W. Conn, president of the Kavli Foundation, which has committed nearly a quarter of a billion dollars to science and is part of the private effort to increase financing for basic research. “Philanthropy is no substitute for government funding. You can’t say that loud enough.”

“If I’m a rich person, I’m going to give to a leading institution — to Harvard or Princeton,” Dr. Murray said in an interview. That pattern, she added, “poses big issues” for the nation.

Melanoma, the deadliest of skin cancers, also strikes and kills whites preferentially. Debra Black, wife of the financier Leon Black, survived a bad scare. Soon after, the couple teamed up with Michael R. Milken, the former junk-bond financier, whose charity FasterCures gives advice on how to accelerate research, to found the Melanoma Research Alliance. It quickly became the world’s largest private sponsor of melanoma research, awarding more than $50 million for work at Yale, Columbia and other universities.