I missed this a couple weeks ago but thought it was still worth a mention.  Now is Walgreens a troll too? 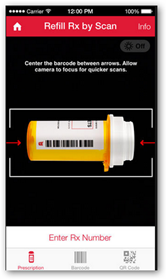 The reason I say this is they “just received the patent” a month ago and mobile phone scanning has been going on for a number of years now.  Shoot 6-6 years ago I was scanning with my old Windows Mobile phone.  Speaking of such, the patent case seems to specifically mention mobile apps on iPhones, Android phones and BlackBerrys, so I guess current day Windows phones are out the loop on this one.

So the deal here is to get CVS and Rite-Aid to pay up and buy some licenses.  “Express Refill” is the name of the software or program, Patent Number 8,626,530, titled “System and method for express refill.”  So this is the future with drug store kings that are cash rich suing each other right?  Walgreens is missing out on some data too if other drug stores are refilling those prescriptions:)

A while back MMRGlobal filed suit against Walgreens for violations on patents they filed many years ago.

The complaint here also discusses the fact that customers are also being encouraged to use such programs at CVS and Rite-Aid stores too…stay tuned.  BD

Walgreen, the largest U.S. drugstore chain, with $72 billion in sales last fiscal year, got a patent last month for a system to “express refill” prescriptions and is entitled to exclusive use of the invention, the Deerfield, Illinois-based company said in complaints filed Jan. 31 in federal court in Wilmington, Delaware.

The chain said it “owns, offers and operates” mobile applications that run on iPhones, Android-equipped phones and BlackBerrys. Rite Aid, CVS and Shopko are using the methods without a license, according to Walgreen’s filing, which seeks unspecified damages and orders to stop the infringement.