Home » Insurance » Medically Related » $175,098.80 To Fix A Hammer Toe Billed by New York Podiatrist And the Insurer Paid It, Well Sort Of As They Sent the Check to the Patient By Accident, A New Investigation For “Out of Network” Charges Has Resulted

This is one for the books and where were those United Healthcare “fraud detection” algorithms on this one?  This would be a dead hit with the procedures to be way out of customary charges!  Why did this just slide on through when they are so brutal on other smaller charges with questions?   $5000 or even a little less 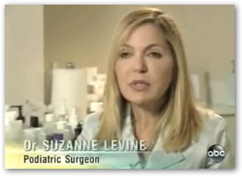 for this type of procedures in New York for fixing two crooked toes, but this podiatrist works on celebrities and the bill amount kind of indicates the size of a “celebrity bill” if you will.

The patient now and her husband are holding on to the check and the doctor’s office tried relentlessly to get it, even offering to send a special messenger over to pick it up but the patient was not budging and you can’t blame them when you look at the amount.  The office provides “foot face lifts” with Botox and other types of injections as well.

Well perhaps since the patient’s husband is a Manhattan banker the doctor figured they were good for it, right?  In this case with United just sliding out such a huge check one might wonder do they get any preferential considerations too?  I’m just speculating on that like anyone might do.  Not only did United pay the bill, but added on over $4000.00 in interest so I am guessing it took a while to process.  The doctor’s office tried to say later that the bill had been a mistake after all the collection efforts had failed with getting the check from the patient and her husband.

The doctor has fixed the toes of celebrities like Barbara Walters, Bill Cosby, Oprah Winfrey, Katie Couric, Liam Neeson and Naomi Campbell.  That could be size of the bill they get?  You can have major surgery for this price.  Here’s a 20/20 video featuring the doctor from a few years ago explaining one of her foot fix procedures.  BD

The insurer agreed to pay $170,940.04 plus $4,158.76 in interest, according to the explanation of benefits that Renee Kantrowitz received along with the check.

The sum is more than enough to pay for major heart surgery at NYU Langone Medical Center, where it costs the average patient $125,392.

Amazingly, insurance giant United Healthcare/Oxford paid most of the bill, cutting a check earlier this month for $175,098.80.

Instead of sending the check to Suzanne Levine, a foot fixer with a roster of celebrity clients, United Healthcare mailed it to the shocked patient. And Levine’s office has been frantically trying to collect the money.

“I’m stunned,” said Dr. John Santa, a director of Consumer Reports Health. “Did they use a proton beam for this?”

There are no laws regulating prices, state officials say. Other Upper East Side podiatrists say they don’t bill more than $3,000 to correct a hammertoe.

Levine — who as a podiatrist is not a medical doctor — injects Botox to smooth out tootsies (“for that ‘angry’ look”) and touts procedures such as “foot face-lifts.” She also injects Juvéderm and other chemicals into the pads of feet as a cushion against the pain of high heels.

Levine offered to straighten out one of Kantrowitz’s toes, making a small incision in her foot, a procedure done in one of her exam rooms that took about 25 minutes. When Kantrowitz returned for a follow-up, Levine did another toe in a similarly short session.

Kantrowitz said he’s holding onto the uncashed check until he gets answers. A spokeswoman for United Healthcare said it has launched an investigation “into the provider’s billing for out-of-network services, as charges like these are beyond egregious. We are suspending payment in this situation pending investigation.”