Home » Medically Related » My Commentaries » Other Items of Interest » Technology » Another Answer To Interoperability With Medical Records - Middleware From Zoeticx With Common User Interface, I Knew That Idea Would Not Die:)

There’s certainly nothing new about “middleware” but the difference is in the platform designs we have today and the devices that work with them.   Zoeticx has a bit of a unique answer and it accesses 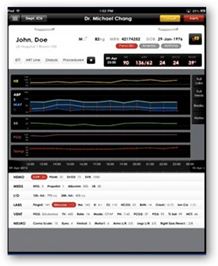 and contains the information on a temporary bases from the servers where the patient medical records are stored.  If I am reading this correctly after the devices is inactive or no longer in use, the connect where a temporary cache of records stores the data goes away.

This is not a new process and is basically how most middleware works but the key here is the security and the devices as well as individuals that have access.  Only devices that are “registered” with the Zoeticx server services will have access.  It does require “client service” apps to work and that supports the services such as alerts, record access, etc. provided.  The server works with a gateway that supports many different brands of medical records.

Then you move on to the apps and again those can be on a phone, and Ipad and it actually replaces the the medical record format of the medical record for easy access from one screen.  What’s kind of funny in a way is that when I look at the design it kind of takes me back a few years to the Common User Interface from Microsoft that never took off but sometimes you see similar or same ideas circle back around again and maybe in just a little different format.  I wrote about the Common User Interface on this blog a few times and when watching the video that’s what it reminded me of.

Let’s have a little fun here for a moment when talking about the user interface, watch this 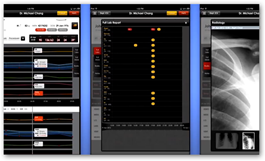 video below.  When I was at HIMSS in 2008 I ran with this demo on a tablet and those were the “earlier” days of EMRs and it was so funny back then as all the vendors were asking me “who’s system is that” thinking they had missed something.  It was a demo I picked up at a Microsoft Tech Net meeting but did great for demonstrating a tablet, which is why I was there.  See how the two designs here share some familiarity?  Sometimes technology has has brew a little bit and parts of it comes back in different places and in different ways.  This demo in 2008 was way ahead of what was out there.

So back on track here with the CareIntelligence software it connects the doctors, patient at home, hospital so all can collaborate.  It looks interesting and seems to offer a user friendly interface along with required gateway security to connect to various electronic medical records systems.  I did see somewhere that Allscripts was working with them for an interface or may already have one by now.  BD