We do live in complex times today and certainly there’s some goodness to be had here but a “model” is required as we all know that the insurance business is “for profit” and whatever CMS does is pretty much followed by commercial insurers and thus so a “good working model” is needed first to see how it would work and look for any unintended consequences in a model before they show up in the the “real world”.  Granted models

are not 100% as many seem to think today but they are useful in finding issues that need to be addressed before giving such approval to telehealth in some of these areas.

Even on the consumer side this has to be watched a bit too as you can’t have a busy executive giving grandma a device and only expect to interact when there’s an issue and ignore the “human” side of communicating as a human with grandma too.  We know that happens and it may not be on purpose but it does as we still have big issues out there today with folks in every walk of life trying to determine where the boundaries are with the virtual and the real worlds.  A few weeks ago Oracle CEO Larry Ellison did such a fine job explaining this as he did a Q and A about their human resources software.  We are lucky too that we have the maturity here of Mr. Ellison and Bill Gates too as those guys wrote the original code and have grown up with all of this.

So circling back around here, sure there’s some benefits to be had here but right now with the gray issues of defining where virtual and real work together or need to separate, a model is needed to pursue this further rather than to just cast your fate to the wind and connect everybody up.  If you want that kind of what I call “billionaire immaturity” then go look at Facebook with a big firehouse of algorithms that tell you what they thin you should read and where importance is…big difference here by all means.

Again with Sebelius and Tavenner I would hope this level of 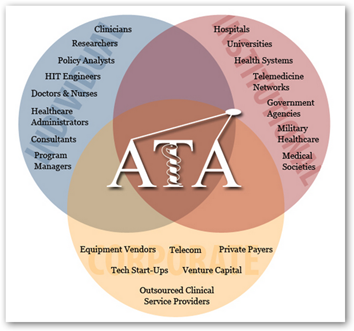 maturity exists before jumping in feet first and not repeating the  “algorithm fairy” type of actions we saw with Healthcare.Gov would be on their list of considerations here.  Of course the ATA wants it as there’s money to be made and saved, both ends.  Again though you do not want the “patient care and safety” to be compromised with implementations that don’t work.  We are seeing a lot of that today with folks that just connect folks up and say “you got your connection” you’re fixed and set up.  It still goes beyond that as this is a “human” business of course with healthcare.  The weird perceptions of non tech folks are clearly spelled out with this story that was in the news…where the “Sebelius Syndrome” spoke loud and clear..again asking the OIG to do an audit when they don’t have the resources to kind of blame shift here.  So again this is why I say build a model so we don’t have more statements and “pass the buck” statements like this show up.

With data you could skew the use to keep people out of the hospital too as we see data used and abused today in the name of efficiencies and to save and make money.  So if this is to be considered, we need much more work here other than just sending a letter as we do need to model this and have a collaboration of both the ATA and CMS work together rather than just your fate to the wind.  There are some good efforts in Telehealth so far and mostly controlled at the hospital level such as what Banner does with monitoring patients after surgery and I’m sure they worked on their model for a while before rolling it out and it constituted a lot of planning so again this is where we come back to “modeling” before just giving a cart blanche on some of this and the patient is given a choice of the telehealth doctor or a real human.  Of course the telehealth doctor is connected to the local help at the hospital to alert them immediately during monitoring.

We live in very complex times today and again a letter asking is not just sufficient without a pilot working model to be tested first as all telehealth applications are not created equal and the ATA seems to have quite a few focus groups as well.  BD

The American Telemedicine Association has asked the Department of Health and Human Services to "lift unnecessary restrictions on health care delivery that prohibits millions of Americans from accessing quality medical care."

In a March 4 letter to HHS Secretary Kathleen Sebelius, ATA urged her to allow Medicare providers paid under alternative payment methods the flexibility to use telehealth as a means to add value for Medicare and its beneficiaries.

“Due to current restrictions outlined in the telehealth provisions of the Medicare statute 1835(m), providers cannot take advantage of the full capabilities of telemedicine and telehealth due to unnecessary limitations,” wrote Jonathan Linkous, chief executive officer of ATA. “The current language creates artificial barriers to care including patient location restrictions, communications technology restrictions, and it also defines a narrow list of eligible providers and covered services.”