McLaren Hospital System Announces Lay Offs and Cuts - Patient Deductibles Going Up, Provisions of Affordable Care Act With Lower Reimbursements At the Root of the Problem

The CEO said it wouldn’t be surprised to see other hospitals doing the same in the next 6 months.  Just a couple weeks ago we had McLaren signing up with Shared Clarity, a United Healthcare subsidiary.  Along with 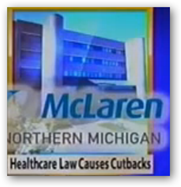 getting data to sell the association has a purchasing arrangement to where members can get lower costs on devices.  It was in the news today that stents would be primarily bought from Medtronic and Abbott.

The hospitals wouldn’t be doing this if they didn’t need the money but as the CEO states, a lot of their costs are fixed and this is the only answer.  You can also see Mayo out doing something similar with almost being a commercial for another division of United Healthcare, Optum Labs.  Mayo took in 9 billion in revenue last year and showed $367 million in excess revenue (profits) and $300 million of that was a gift.  On the other side of the coin you have UMPC making a billion in excess profits and Cedar Sinai with over $600 million in excess revenue, so demographics and patient payer type mix does make a difference.