I read this and it’s crap story.  First of all there’s a 3rd party here doing analytics and the doctor was sent a letter, out of the blue with no early warning that he was out.  Again why did this not take place during open enrollment.  It’s time to go back and use data to make someone look “bad” and that’s exactly what occurred here.  The man from the 3rd party says they had complaints that the doctor was turning patients away.   Ok but was he up to a limit to where he had tons of patients?  What about all the seniors he takes care of now, punish them too?  He has 200 patients affected that he was seeing…so no small number. 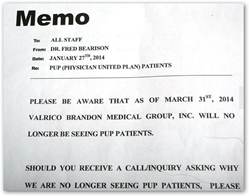 Why did it take place two weeks after open enrollment closed?  The doctor’s group uses that 3rd party to do their analytics and if patients were being turned away did anyone ask the doctor as to why or how many…yes how many were turned away, 1, 2,3 or whatever?  This has been going on with Untied Healthcare in the northeast..same thing, analytics and algorithm says…this is the danger on building a data case after the fact as things are taken out of context.  If you want to learn more about how some of this works, scroll down to my footer and watch video #1, Charlie Siefe from NYU will tell you how some of this happens.  If you don’t get enough with the 4 videos there, hop on over to the Algo Duping page for more..and don’t expect to take everything in at once but this is my effort to help inform those who want to know what the cause and root of all of this is beyond believing in Fairy tale politicians who believe in the “Algo Fairies”..as most we have in office run for hills when “math” is brought up.

You can use data and analytics to find something wrong with everything and everybody today and it’s being done over and over.  Everyone is trying to protect their profits.  Below is more information about how the processes work.

This is all that Obamacare and Health insurance is all about today, one more Attack of the Killer Algorithms.  How can anyone have any confidence on what they bought, what they are going to get as far as care when one new algorithms goes ripping through and changes things in a flash, where’s the ethics here?

It’s hurting people and you can’t keep shifting people around like cattle!  This is what corporate USA is doing along with analytics that make a case for any unpopular decision that has to be made.  For many years what’s on the computer screen brought us a lot of accuracy and help and that’s still true today but it’s not like it used to be.  So when you look at the answer a query gives you, sniff it and be a skeptic if the context is not relative as it very well may not be.

I am guessing there will be more stories like this doctor as the analytic roll and people get shifted around like cattle to save a buck.  Again the content in this story as written hides analytics use and I don’t think there’s any real grounds to boot the doctor out as again you can trump up anything to make an excuse to do what you want to do.  Remember too it usually is the 3rd party analytics folks that seem to be the cause of so many security breaches today too with their methodologies that nobody questions.  The patients are all stuck having to change doctors until 2015 open enrollment comes up.  BD

TAMPA — Walter Bennett had one question before signing up for a Medicare HMO plan: Was his doctor of 14 years, Fred Bearison, in its network?

Yes, came the answer from Physicians United Plan, a private company that contracts with the government to offer managed care plans to seniors and disabled people. So Bennett, 84, enrolled for 2014.

But in January, less than a month after seniors were locked into their Medicare picks for the year, the insurer informed him — and nearly 200 other patients — it was dropping Bearison's Valrico practice from its network.

The case also illustrates the instability of some Medicare plans' networks as insurers try to protect their profits amid new financial challenges. Last year during open enrollment, UnitedHealthcare dropped thousands of doctors and a number of prominent hospitals, including H. Lee Moffitt Cancer Center and Research Institute, from its Medicare plan networks.

Last year Medicare Advantage was the most profitable line of business for Florida health insurers, which are paid by the federal government based on enrollment. Physicians United Plan, an 8-year-old Winter Park company, had nearly 31,300 enrollees and made $4 million in net revenue last year, according to industry publication Florida Health Market Review.

Bearison, a former member of the Florida Board of Medicine, said his office was told only the termination of his contract was "for business reasons."

"We just got the letter out of the clear blue sky," he said. "They did not send us one shred of paper that there were complaints against us."