Home » My Commentaries » Other Items of Interest » Technology » Edward Snowden On How We Take the Internet Back, Privacy Is Battle Number One, TED Video

Edward Snowden On How We Take the Internet Back, Privacy Is Battle Number One, TED Video 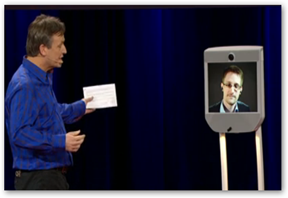 Through modern technology we have Edward Snowden again and unlike his visit in Texas recently this is a little better.  He has a full on tele-presence robot he can control this time and does as he moves around the state.

If you read here often enough then you get to hear me talk about banks and corporations that are mining and stealing your data right and left too, which I think is worry #1 and the NSA is worry #2 as the companies and banks do reach and touch all of us every day whereas the government has to determine an interest in looking at what you do and there’s a lot of us out there, but it’s still a concern by all means.  Read the link below to see what private industry does, worse than the NSA with mining and selling your data.

On thing that both have in common is the use of data “out of context”.  Twice I have had to use surveillance methodologies as an IT person due to some “real” problems and even IT folks don’t like to do it, I didn’t.  When you see a person as to who they are and what they say and then look at data tracking (which was what the problem was with downloading Trojan horse type data at the time) you really see things you really shouldn’t see but you don’t have a choice at it’s all together and you never look at that same person the exact same way again even if the tracking is nothing major or controversial, it’s just a bad spot nobody should really want to be in.  Anyway case and point made here by Edward Snowden is how the context of data is used and perceived and it can be far from what was really occurring at the time and that can be the government or private industry, they both can do this and cause harm.

It was pretty funny when Snowden was asked about Dick Cheney and I won’t spoil that for you, a must see on that part as well as the discussion about Diane Feinstein.

Scroll on down and watch the 4 videos in the footer if you want to learn a bit more on how this works with math models and algorithms and how you get duped or visit the Algo duping/Killer Algorithm page.

Not that I’m that smart, I just know data mechanics and used to be a Query Monster myself but this is what I said about a year ago and since that time it has evolved…you have all kinds of analytics going on out there with nobody questioning what kind of context is used for their interpretations and thus so we are all under attack of the killer algorithms.  Algorithms are still written by humans that are used in analytics so those who have the money or the ability to write them are the ones in control as they have you duped a lot of the time as they want to make money and need you to buy in.  BD

Appearing by tele-presence robot, Edward Snowden speaks at TED2014 about surveillance and Internet freedom. The right to data privacy, he suggests, is not a partisan issue, but requires a fundamental rethink of the role of the internet in our lives — and the laws that protect it. "Your rights matter,” he say, "because you never know when you're going to need them." Chris Anderson interviews, with special guest Tim Berners-Lee.

Tuesday, March 18, 2014
My Commentaries , Other Items of Interest , Technology