It was just yesterday I posted about the Healthcare X-Prize for 10 million and this sure over shadows that amount by a long shot, and this might be a less complicated issue as it has only one point of focus and everyone would win.  Nice comments too on his healthcare foundation which has funded more than $110 million in research and discovery, most of it related to hereditary diseases. 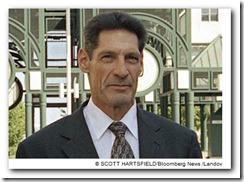 The race for the prize has gone to the dogs!  His comments though about 10 million not being enough might carry some real weight, so I guess in time we shall see.  I am an animal lover and owner myself, nice cause and great kudos.  BD

A very rich, very impatient retired surgeon wants the pet overpopulation solved. So Gary Michelson has put a hard-to-ignore enticement on the table: $75 million. The person or group that comes up first with a safe, one-time non-surgical means to sterilize male and female cats and dogs gets $25 million, Michelson's non-profit Found Animals Foundation will announce today at the National Spay/Neuter Conference in Chicago. And up to $50 million more will be available to support the research of one or several individuals who come forward with plausible approaches.

No one will stop what they're doing and turn their attention to this problem for $10 million. That's not enough," says Michelson, 59, a retired Los Angeles orthopedic surgeon who invented and patented hundreds of surgical instruments, won an infringement case in 2005 and landed at No. 317 on Forbes' 400 Richest Americans list last month.

The solution may originate from any of several arenas — from human or animal researchers who are endocrinologists, neuroscientists, reproductive biologists, molecular technology experts, or even pharmacology specialists.

Michelson's foundation has put together a review board of experts from several disciplines and will add more if proposals from unexpected arenas arrive. The board will meet in January to consider which proposals will receive a first-stage grant.