As of now, we have still had to connect the devices via usb to our computers, but with the new technology, device manufacturers finally have an alternative so the transmission would be wireless.  The old blue tooth technology was not sufficient, but apparently this is ready to go to market 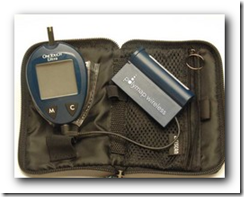 and be sold to those who make the units to incorporate the new protocol.

It would certainly beat using the cords by all means.  BD

(PRWEB) December 17, 2008 -- Facilitating the entry of Bluetooth into the medical device industry is the modern protocol analyzer, now updated to effortlessly examine not only the wireless interface between devices, such as a glucose monitor and a telephone modem, but also the interface between the device CPU and the Bluetooth chip inside the device. The advanced capabilities of today's protocol analyzer software help to overcome the fear associated with "cutting the umbilical cord" to traditionally hard-wired elements.

"By embedding Bluetooth technology into your product you gain access to an expanded market, one that I would argue is a very important market because of the exploding geriatric population and the increasing number of people with chronic diseases," says Pierre Landau, Ph.D., president of Tucson, Arizona-based Polymap Wireless.