One more sign of the tightly stressed economy as related to hospitals and healthcare, a potential merger which also carries many financial strings to be considered.  As stated in the last sentence here, it is a decision of having a publicly medical school in the state, as public funds would be deemed necessary to make it all happen.  It is the only public hospital in the state, and even though California a much larger state, I almost couldn’t imagine the possibility of no public hospitals here, one scary thought indeed.  BD

THE University of Connecticut Health Center, which has survived with the aid of $52 million in state bailouts since 2000, is now hoping for legislative approval to merge with Hartford Hospital. Advocates of the merger believe that it would eventually end the need for repeated infusions of state funds and would give Connecticut a major academic medical center that could provide an economic boost to the region. 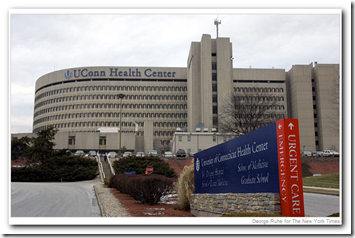 The proposal comes amid forecasts of state budget deficits as high as $6 billion over the next two years.

“I suppose this does seem like a bad time,” Mr. Hogan admitted as he began a round of lobbying visits with legislative leaders earlier this month. “In the long term, though, the hospital has to be rebuilt. I don’t see any way around it.”

Ms. Heinrich said that lawmakers must also consider the possibility of closing the UConn health center, which has encountered frequent financial problems since it opened in the 1960s. “Just like with every decision we have to make, we have to look at every option,” she said.

He said UConn would also need the state to pay for the difference between the cost of benefits and health care for Hartford Hospital employees and the more-expensive plans that UConn Health Center employees, who are state employees, have.

Mr. Hogan estimated that cost at $10 million to $15 million a year.

“The real question is whether we want to have a publicly funded medical school in this state,” said Ms. Harp.