A partial listing of some of this clients who are now stuck can be viewed here.  If you have not caught up with this story, it is stated to be a 50 billion dollar Ponzi scheme.  Healthcare and the charities don’t appear to be coming out of this unscathed, at a time when the news couldn’t be any worse when funding and contributions are so desperately needed.

The dean of the Massachusetts law school was another victim and the listing seems to be growing.  One newspaper summed it up here:

“Madoff, though a pioneer of electronic trading, refused to provide clients online access to their accounts.

"This was extremely secretive, even for the non-transparent world of hedge funds," said Jake Walthour Jr., of Aksia, a New York consulting firm that advised clients not to invest in Madoff's funds.”

Interesting how he was a pioneer on software and electronic trading, but not for the “special” clients, almost too hard to hide with the current software availability today.

Some say there were warning signs as the Madoff Family Foundation gave only $95,000 to other charity groups last year. Cancer research became a cause close to the Madoffs when son Andrew was diagnosed a few years ago. According to reports, it was Andrew and his brother, Mark, who discovered their father's alleged pyramid scheme .  In 2004 the Madoffs donated $2.5 million to Memorial Sloan Kettering Hospital.

The Gift of Life Bone Marrow Foundation is where son Andrew became the chairman of the Foundation after a gift of 1 million from the Madoffs.  In 2007 the charitable donations for cancer research were almost non-existent compared to the past.

The Shapiros and the Madoffs were close friend and associates over the years as well.

You can only run the algorithms or formulas for so long until the money runs dry.  Again, I go back to to whistleblowers and algorithms still being the hottest trends in healthcare, not necessarily good ones, but they exist.

“The Shapiros have been generous to a number of Boston hospitals and universities. Construction is scheduled to start next week at Boston Medical Center on the Shapiro Ambulatory Care Center, a nine-floor, $135 million facility paid for in part with $15 million from the Shapiros.

In March, the foundation pledged $27 million to DanaFarber/Brigham and Women's Cancer Center in Boston. At Brandeis, which received $22 million from the Shapiros to build the campus center building, spokesman Dennis Nealon said the school was monitoring the situation.

Some of Boston's wealthiest and most prominent philanthropists have lost millions of dollars to a Wall Street investor accused of running a $50 billion Ponzi scheme, a case that has already shuttered one foundation and could hurt nonprofits in medicine, education, and the arts.”

Hopefully the Shapiros can pull everything together after all of this and some hospitals and charities will be able to continue to build, expand, and operate as planned, based on these donations.  One thing technology is helping bring to the forefront today is transparency and hopefully agencies like the SEC will undertake using some additional resources in the near future too, like the recent efforts of the FDA to improve their efforts.

Again, we have one more situation of ‘No Audit Trails” to view, thus the scheming and fraud was able to continue to grow.  This adds one more government agency in dire need of some new technology as well, the SEC, as transparency for all citizens needs technology to fulfill the promise before we are all swindled.  BD

Bernard L. Madoff, a former chairman of the Nasdaq Stock Market, was arrested Thursday in Manhattan and charged with 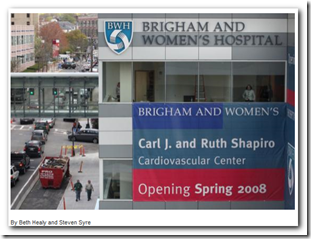 securities fraud by federal authorities.  His clients include philanthropists Carl and Ruth Shapiro, major donors to the Museum of Fine Arts, Brandeis University, and Beth Israel Deaconess Medical Center. The Shapiro family foundation lost almost half its money, or about $145 million, to Madoff.

"We are deeply disappointed to learn about the allegations against Mr. Madoff," the Carl & Ruth Shapiro Family Foundation said in a statement. The foundation said it was reviewing its options to recover the funds and planned to fulfill its giving commitments.  The Shapiros have been generous to a number of Boston hospitals and universities. Construction is scheduled to start next week at Boston Medical Center on the Shapiro Ambulatory Care Center, a nine-floor, $135 million facility paid for in part with $15 million from the Shapiros.

In Salem, the Robert I. Lappin Charitable Foundation, a private family organization that financed trips for Jewish youth to Israel, said it was forced to shut down and lay off seven employees yesterday after losing all of its estimated $8 million to Madoff. The foundation also supports Jewish educational and cultural services on the North Shore. Lappin lost personal funds as well.

Another apparent victim is the Massachusetts state pension, whose officials invested in Madoff's company through a hedge fund vehicle and said yesterday that it has lost $12 million.

Jaffe is active with a number of charitable organizations in Boston where the Shapiros have directed their giving. He is an overseer of Beth Israel Deaconess Medical Center and a member of the President's Council at Brandeis, according to a biography on the website of the Dana-Farber Cancer Institute. His wife, Ellen, is a trustee at the MFA.

People who know Robert Jaffe said that he, too, was fooled by Madoff. Messages left at the Jaffe home were not returned.

Boston donors bilked out of millions - The Boston Globe