They are still not sure why the conditions were able to preserve the brain, and it was found somewhat by accident and none of the other tissue survived.  2000 years is a long time.  BD

Archaeologists have found what they say is the oldest brain ever discovered in Britain, or at least the shriveled remnant of one, 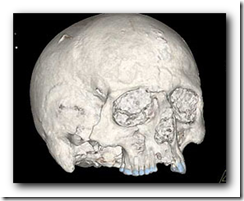 in a decapitated skull that dates back more than 2,000 years. Inside the skull, the scientists found "a yellow substance which scans showed to be shrunken, but brain-shaped," according to a University of York statement. "I'm amazed and excited that scanning has shown structures which appear to be unequivocally of brain origin," said Philip Duffy, a neurologist at York Hospital who scanned the skull.

Here's how the noggin was first noticed: York Archaeological Trust dig team member Rachel Cubitt reached in and, while she cleaned the soil-covered skull's outer surface, "she felt something move inside the cranium. Peering through the base of the skull, she spotted an unusual yellow substance."

"The survival of brain remains where no other soft tissues are preserved is extremely rare," said Sonia O'Connor, research fellow in archaeological sciences at the University of Bradford. "This brain is particularly exciting because it is very well preserved, even though it is the oldest recorded find of this type in the U.K., and one of the earliest worldwide."