One more tale of corruption and healthcare is right in the middle of this one.  If nobody came in with enough to bring to the table the stories say he was going to consider taking the job of senator himself, that being if someone else would find a high paying job for his wife too.

The second part of this story involving the hospital is kind of strange too, and we have had those scandals here in California too.  Kickbacks from the Illinois Health Facilities Planning Board helped fund his campaign.  I’m sure there’s more of that to come.  He wanted a $50,000 campaign contribution from the CEO of Children's Memorial Hospital in Chicago as payback for $8 million in funding for pediatric care, that is just out of this world to say the least.

“In 2006, Modern Healthcare named Blagojevich one of 30 people who could have a powerful impact on healthcare in the future.”

I don’t think this was the type of impact he was perhaps thinking about.  Does make you wonder how everyone else along the line received their positions of all of these allegations are true.  He did worse than hanging out with an escort as did Spitzer and has been arrested.

He allegedly asked advisers if they think Mr. Obama can get Warren Buffet and others to put up $10 to $15 million for a foundation he could head, so I guess he was not making enough as Governor and/or wanted more power somewhere along the line?  Well perhaps we might be looking for some type of insanity here before this is all over, but there’s definitely the undertones of greed riding throughout what has been published so far.

This is a very strange story indeed and more can be found here at the New York Times.  BD

Federal prosecutors allege that Democratic Illinois Gov. Rod Blagojevich, who was arrested this morning, attempted to leverage his authority to appoint President-elect Barack Obama’s replacement in the U.S. Senate in order to get himself appointed HHS secretary in the new 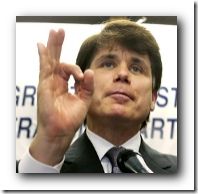 administration or, barring that, other lucrative opportunities.

The arrest and corruption charges against the governor, 51, and his chief of staff, John Harris, 46, stem from a long and wide-ranging investigation of the Blagojevich administration involving appointments and state business traded for campaign contributions. They are charged with conspiracy to commit mail and wire fraud and solicitation of bribes.

Prosecutors also allege Blagojevich attempted to extract a $50,000 campaign contribution from the chief executive officer of Children's Memorial Hospital in Chicago as payback for $8 million in funding for pediatric care—the contribution was not made, and an intercepted phone call between Blagojevich and others indicated the governor was contemplating rescinding his commitment to Children's, according to the affidavit.

Children's Memorial identified the funding in question as Medicaid reimbursement sought for care provided by subspecialists in a lobbying effort in collaboration with other Illinois providers. "If such allegations are true, Children's Memorial, pediatric physicians and the children of Illinois have been victimized," the statement said. "Children's Memorial is cooperating fully with federal authorities on this matter.