The business model is also very intelligent, as they make no product for sale on it’s own, but rather collect the royalties from device manufacturers who use it, sounds just like software.  No surprise perhaps as the CEO is a nine year veteran from Microsoft, somewhat similar business models here in with a biotech company. 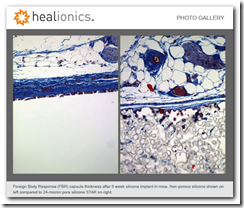 The National Science Foundation is also equally impressed with the developing technology as well.  BD

Redmond, Washington -- Biotechnology company Healionics said that it has secured $2.6 million in its first round of venture financing. Healionics provides "biomaterial solutions to research institutions and medical device manufacturers." Investors in the round included Alliance of Angels, Bellingham Angels, Keiretsu Forum Seattle and others. The company said it would use the funding proceeds to continue development of its products.

The technology of Healionics began as a Ph.D. research project in Ratner’s lab around 2000. Every year, says Ratner, some 50,000 people in the U.S. die from catheter-related infections, and more broadly there are about 325,000 complaints about biocompatibility of medical devices. When a foreign object is inserted through the skin, the body’s natural defenses form a capsule of tissue around it or work to eject it, which wreaks havoc with any device’s operation and can cause infection. So Ratner and his student Andrew Marshall came up with a type of biomaterial that could be used to coat an implanted device and help it integrate better with the body’s tissues.

The company, led by CEO Robert Brown, a nine-year Microsoft veteran with an M.B.A. from UW, uses its porous-biomaterial technology to improve other companies’ medical devices, but doesn’t market any products of its own. As a result, it collects royalties on other companies’ sales without having to invest in expensive R&D or new clinical trials, so it can get by on smaller amounts of funding. Healionics has about 10 contracts with other companies, including TRBioSurgical, an Arizona-based biomaterials firm that is developing a glaucoma implant for veterinary use.