Today I had the opportunity to speak to Margaret Mayer and Thom Blackwell from Boston Software. The product they both sell direct to hospitals and license

with other software manufacturers is the Boston Workstation. The software is best suited for having a computer do the long and time consuming tasks that can be completed in a minute or less with software. The software is used by over 2200 hospitals, mostly in the US, but additional installations exist in Australia, the UK and a few other countries as well.

The concept is pretty basic and it uses the standard Health IT standards for data exchange. The company was actually started a while back with practice management systems for sale and has graduated to the Boston Workstation. It can almost be called an “automated copy and paste” in functionality as it is moving data from the screen to other formats via scripting. Many hospital IT groups have one or two individuals on board who have some scripting knowledge, as there’s a bit of that involved when setting up servers and their functionality, so for an IT department, it’s pretty much a natural.

The interface is also easy enough for an individual to learn as well, so it can be used by either a beginner or an experienced individual. The product is sold directly to both hospitals and other software vendors, who may incorporate the software into an overall larger system and provide the scripting as an optional module or included in the full purchase. For the general office individual a typical scenario might be uploading data from Microsoft Office (Excel, Access, Word), printed text reports, ASTM, HL7, X.12 and XML messages. With the functionality of working with Microsoft Office and most being familiar, this makes for a much smaller learning curve as well.

The University of Pittsburgh Medical Center, for example is using the Boston Workstation to go directly to payers’ web sites to electronically obtain real time insurance eligibility, and then automatically post that information to the patient accounting portion of their McKesson hospital information system. Give this some thought for a moment, when checking insurance eligibility with a person doing the job, there are a few methods and combinations there of to choose from. First of all, you can pick up the phone, sit on hold and wait and this can prove to be a long dubious task.

The second method would be to visit the websites of the insurance carriers and this can involve a lot of time as well, faster perhaps than sitting on the phone, but if the patient has changed carriers, changed policies, which is being done frequently today, you have another time consuming

process right here, some being simple and some that can get very complicated.

The third method would be to let the software do the work for you, in other words with a couple clicks, one would be able to query and gain all the information at once. I think this is pretty much a no brainer when it comes to calculating and ROI and the time with a human doing the work versus software, as anyone who has done any searching on the web can probably relate to. In addition, the information is automatically added, so with methods one and two, someone still has to do the data entry.

The third method with using the software from the workstation also yields some additional benefits with business intelligence and reporting functions, in other words how many queries were ran today, how many individual look ups were performed, how many labs were processed and so on with additional detailed information included. The business intelligence side of the software could also be used with other software programs in place as well.

There are other areas where the scripting can come in handy too, such as the point of registration for patients and could easily be adapted for use in a kiosk for one example. The software can also be used with an electronic medical records system to deliver accurate information let’s say for a new chart being created. We have all done data entry at one point or time and when manually entered via a keyboard, the risk factor for typing errors and other data entry mistakes increases, thus when when a data transfer is done versus taking the time to have to manually re-type all the information into another software program the error rate goes up.

I related immediately to both the time saving and error reduction with the software being that I had myself, a few years ago somewhat created a similar type of project that worked with the electronic medical records system I wrote and another program from another software vendor to do something very similar, in other words re-use the information to populate the other program and vice versa, and even in it’s simplistic format, it was already saving, and still saves a huge amount of time for my clients still using the system.

The Boston Workstation is almost like having your own “electronic employee” going to work for you. Until the interview today I was not aware of the software and realize what a huge timesaver it can be, as without the use of automation through a simple scripting software program, a programmer is going to have to start from scratch to create an application such as this, so even from the development time with programmers and code, vendors such as McKesson use the software as it save them time in developing a similar type of software. Why re-invent the wheel in other words.

I thank both Margaret and Thom today for taking a few minutes out to discuss their product and it was truly a very educational and informative discussion and I learn new things every day. Below I have included some basic information from the website and for more information, you can use the link below to find out more and check out the ROI tool on the site, worth taking a look. BD

These are just a few of the simple task automation projects that Boston WorkStation does quickly and easily. In addition to saving time, Boston WorkStation allows you to reassign your staff to be more productive and eliminates costly errors.

Boston WorkStation is task automation software that allows healthcare organizations to automate thousands of common tasks, manage workflow and improve productivity. As a highly sophisticated scripting tool, Boston WorkStation scripts are very logical - they make sense to users and that makes them easier to develop in the first place. 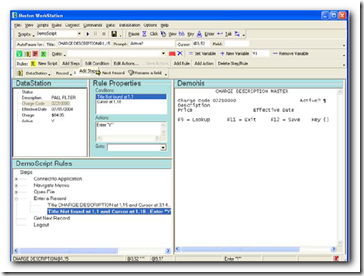 Boston WorkStation comes “fully loaded” with features and capabilities that other companies charge more for, including: