Well here’s one more and Mr. Chopra was good and got everybody motivated but time to move into the next phase with implementation and perhaps a little different leader is needed to pass the baton.  We have had the word “innovation” up to our ears and now it’s time to begin some serious efforts with “collaboration” and perhaps a different personality to move to the next level with government IT.  About a year ago I made the post below saying pretty much the same thing.  BD 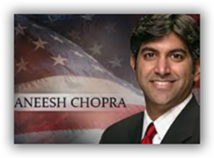 Aneesh Chopra, the first White House chief of technology, has resigned after almost three years on the job.

Chopra's resignation was announced in a post on the White House Office of Science and Technology Policy's blog that did not explain why he's leaving the Obama administration. The Washington Post reported that he is rumored to be considering a run for lieutenant governor in Virgina.

"When President Obama came into office in January 2009, the administration found a federal government relying too heavily on 20th century technology," John P. Holdren, director of the Office of Science and Technology Policy, said in the blog post. "On his first day on the job, the president created the position of 'chief technology officer.'"

The White House under Obama has used technology -- social media in particular -- much more than previous administrations. This can be attributed to the rise in popularity of social networks such as Facebook and Twitter, but Chopra may have had an influence as well.

Before entering public service, Chopra was managing director with the Advisory Board Company, a publicly-traded healthcare think tank.