This is good news as I have ranted about mobile apps that do “one thing” for a long time and with what is written here, device agnostic software along with 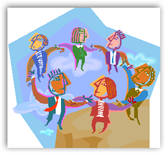 agencies leveraging each other’s gains is nice.  We have way too much glut and too many “me too’s” out there and not only in healthcare but even at CES this was mentioned as well.  We have device fatigue.  If you read the link below I did a little out of the box commenting with software used for medical records and then some.

Now if he can just slowly break Aneesh away from the “I” word above and talk more about collaboration things will work better I think.  I kind of got tired of hearing Chopra talk about how programmers could get rich to stimulate them into writing code.  Some got stimulated alright but not enough for the government as many went to work writing algorithms that mine social data instead.  As mentioned, a government mobile apps store would be great and again with sharing between agencies with some APIs and scripting one agency can benefit from another.  BD

Federal Chief Information Officer Steven VanRoekel launched an interactive dialogue on government mobile policy on Wednesday that he said would be the first step toward a government wide mobile roadmap due out in March.

That roadmap, VanRoekel said, will address a range of issues from ways the government can save money -- such as by buying smartphones in larger quantities -- to serving citizens more effectively through public-facing apps.

As things stand now, too many agencies and bureaus are putting time and effort into mobile projects without leveraging each other's gains, he said.

It also will include information about building internal mobile applications to help federal field officers, such as U.S. Forest Service workers and Border Patrol agents, do their jobs more efficiently.

VanRoekel's office is considering something along the lines of a governmentwide apps store so one agency can adopt or retrofit an app another agency has developed, he said. Apps placed in that store would probably be required to be "device agnostic," he said, so the government wouldn't become overly dependent on a particular provider of mobile devices.