HealthVault on Windows Phone Mobile Made Possible by iTriage, a Wholly Owned Subsidiary of Aetna

Here’s one more acquisition from Aetna in the Health IT area and it appears that down the road, connecting to Aetna’s PHR they provide to get this data back into their files could be in the works, but you have a choice here to say yes or not.  I 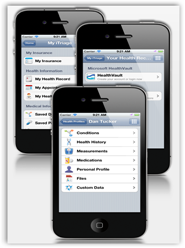 remember when HeatlhVault was announced, former CEO of Aetna said publicly that Microsoft had no idea what they were doing and could not do it as well as an insurance company, well that was a about 3 years ago or a little more and now look at what’s happening.  It’s all about the data and risk assessments from the insurance side.

You can almost guess too that Aetna will be using the developers to create more mobile apps that will get more patient data into their files, so just be aware and I’ll keep my HeatlhVault file separate and closed off from any insurer to access with any data connections for sure.  I can always share what I want or provide an exported spread sheet so no worried there and don’t want insurers poking around in my PHR for now.

If you watch a little television of late you can see the advertisements from Aetna talking about their PHR and wooing consumers into the data game. As insurer contracts get more complicated and complex it’s rolling over to the consumer to find out where you can go, who can see and what will be paid, no wonder they wanted a mobile arm here to develop even more software for smart phones. I did put the application on my Windows Phone but now I’m thinking about taking it off…maybe.  I’ll see how often I use it.

Not only in this instance but in other areas it’s interesting to see how the health insurers are moving into Health IT and who they are choosing to acquire and partner with.  BD

Healthagen co-founder Peter Hudson confirmed the deal Monday after Aetna officials announced it during an investor-day event last week. Terms for the transaction, which occurred during the fall, were not disclosed.

Healthagen has been growing quickly, with downloads of its free iTriage app for Apple and Android phones exceeding 3 million, triple the number just a year ago.