Doctors using the current Centricity for small practices will have to upgrade and of course I’m sure that mean money and cost.  The GE EHR is probably one of the most expensive products out there for a small practice to purchase.  Just a couple months ago software problems created issues for doctors to attest as you can read below, this is the system they are keeping. 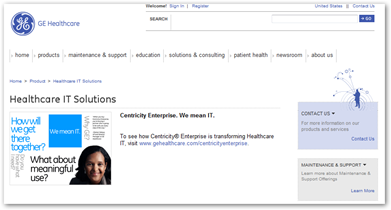 June 30th is the D-Day for posting any new data and it becomes a read only from there until the end of the year.  The upgraded system according to this article will also be able to handle small practices but at what cost increase?  With the purchase of MedPlexus the Advance system was developed to focus on small practices but it looks like they have decided the money is not there so that was a short term target to try and make us of software and algorithms purchased.  BD

GE Healthcare has announced it will discontinue its Centricity Advance electronic health record (EHR) application for small practices as of June 30.

Centricity is GE's EHR platform used by both physician practices and hospitals. It incorporates medical, pharmaceutical, financial and administrative data.

Although Centricity Practice is a licensed product, resellers will offer a remotely hosted version, and GE will help customers migrate to the combined EHR and practice-management platform. VARs will be able to provide the same remote installation and service small practices received with Centricity Advance, said Friguletto. Doctors can also use an onsite version of Centricity Practice.