and moving around just fine.  The device blocks pain receptors which allows him to move.  When you look at the alternative of just under 300 pain tablets a month, what change.

The device actually learns how much stimulation he needs for the pain, we have “device” learning here.  BD

Jeff Hardick shot up from his chair in the waiting room at St. Luke's Hospital in Fountain Hill, strode over to neurosurgeon Steven Falowski and wrapped the man in a bear hug.
A month ago, that would have been impossible. 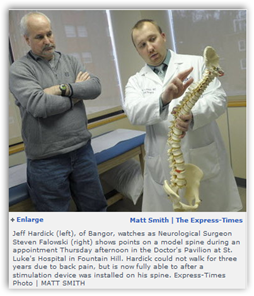 Hardick spent the last three years in bed, slumped in a wheelchair or stooped and grimacing while tottering around with the aid of a cane. He struggled due to constant, crippling pain from a back injury. He was prone to blacking out and falling down. He couldn't work or drive and was mired in depression.

Falowski placed a device onto Hardick's back that sends an electrical current to block pain receptors. It is one of 13 devices available nationwide after the manufacturer, Medtronic, gained Food and Drug Administration approval in November. Hardick is the second person in the nation to have the device installed, Falowski said.

The Hardicks said the road to the new device was littered with doctors who told Hardick he would spend the rest of his life in a wheelchair. Jeff said one doctor even told him to wear a helmet because of his blackouts. He took 270 pain pills a month, plus antidepressants and a sleep aid.

He hasn't touched pain medication since the surgery.