Home » Medically Related » Other Items of Interest » Man has 180 Pound Tumor Removed That Consumed His Right Leg and Was Twice His Weight–This One Is So Ugly!

Man has 180 Pound Tumor Removed That Consumed His Right Leg and Was Twice His Weight–This One Is So Ugly!

Can you imagine a tumor this big?  It was in Viet Nam and he had a hard time finding both resources to have the surgery and surgeons that would do it.  It took five people to load the tumor into a waste container once it was cut free.  When you look at the picture, how in the world did he even move at all without someone carrying the tumor for him.  BD 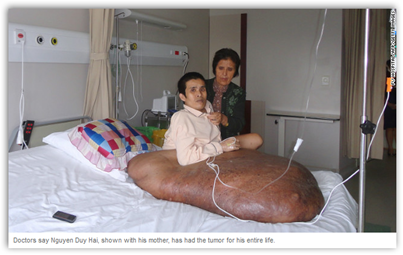 (CNN) -- A Vietnamese man is recovering in the intensive care unit Friday, a day after surgery that completely removed from his right leg a tumor twice his body weight, according to the hospital in Ho Chi Minh City.

The growing tumor had rendered the patient, Nguyen Duy Hai, virtually immobile until his surgery.

The excised tumor weighed 180 pounds (82 kilos), according to the hospital, a bit less than the 200 pounds (90 kilos) estimated before surgery.

Doctors expect that Hai's cardiac and pulmonary functions will return to normal during the next 10 days. After that, Hai faces rehabilitation, physical therapy and possible help from the hospital's clinical psychologist to deal with issues pertaining to body image, Guillon said. "This patient lived all his life with this tumor. It was part of him."