This makes you wonder where in the world philanthropy is going today and how much will remain.  The reasoning is very strange here and if they don’t want to spend the money, be honest and say so.  Planned Parenthood said it was all the anti abortion talk that caused them to withdraw.

We all know that abortion is the “default topic” for all of our digital illiterate Congressmen.

When things with finance and technology come up they just default back to the same old topic because they don’t participate at a very high level if at all in the real world we live in with algorithms driving almost every move and opportunity out there and depriving many.  Yes I have written quite frequently about our digital illiterates in Congress and the “default” topic.  See what they talk about in Congress via the image below, enlightening is is not and shows a huge resistance to talk about

The the Komen Foundation said it was against their “rules” to donate money for any organizations being investigated so should we investigate the Komen foundation while we are at it.  Many now will not receive breast cancer screenings.

But wait, this gets better as over at the Wall Street Journal the New York Stock Exchange was lit up in pink last week..hmmmm.  This was the 4th annual Painting Wall Street Pink night.  Did this have any influence here, I guess only the hedge fund shadow may know.  As you can read below the quote, “it made for a great photo op”….Let’s hope that there are not any conditional donations taking place for sure. 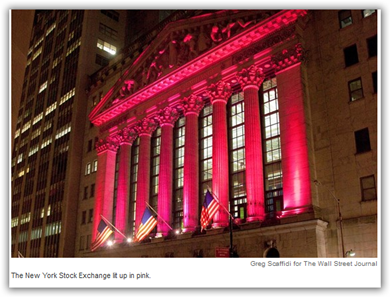 “Despite all the supposed Wall Street types, few of the young professionals, it seemed, had been to the trading floor other than for the annual benefit. It made for one great photo op. Guests lined up to "ring" the trading bell like they were waiting to sit on Santa's lap. They snapped pictures with the many ticker screens and the floor's telephones.”

Last year at this time they were suing over the use of the word “Cure” and Stephen Colbert and rightly so made a good case out of how this was not inline with charities.  Gosh forbid don’t use the word “Cure” as now it seems like with charities that’s a four letter word.  These were all small mom and pop charities too.  I have always kept a link on this site for the Komen Foundation but maybe I should move that one out and put a link in for Planned Parenthood instead.  Below is a clip from the Colbert show on the million dollars spent with lawsuits over the four letter word from the Komen Foundation last January.  BD

Susan G. Komen Foundation Attacking Other Charities Over Use Of The Word 'Cure'

Planned Parenthood contends that the Komen foundation is yielding to longstanding pressure from anti-abortion groups, which Komen denies.

A spokeswoman for the Komen foundation, Leslie Aun, told The Associated Press that the main factor in the decision was a new rule adopted by Komen that prohibits grants to organizations being investigated by local, state or federal authorities. Ms. Aun told The A.P. that Planned Parenthood was therefore disqualified from financing because of an inquiry being conducted by Representative Cliff Stearns, Republican of Florida, who is looking at how Planned Parenthood spends and reports its money.

After the A.P. article was posted on Tuesday afternoon, the Komen foundation declined to make Ms. Aun or another staff member available to discuss the Planned Parenthood decision. The foundation issued a statement saying it was seeking to “strengthen our grants program” and had “implemented more stringent eligibility and performance criteria.”

“Any kind of impediment for women, including a referral to go someplace else, will mean that women delay getting further screenings and women who may have cancer will discover it later than they might otherwise,” Ms. Durgin said. “A lot of our clients are just one hassle away from not getting services at all.”