The association of course is slated to look at cost and then secondly improve the market place and this is not new. Private insurers have seen some golden opportunities to make money with insurance exchanges and the government 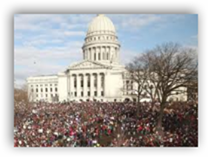 exchange for consumers has been halted according to the statement made in this article from the Governor’s office.  They are not the first state as Kansas is yet another state who has backed away from the idea, even though under reform this is mandatory by 2014.  Sure there are parts of the reform bill that need some change and this is just simply due to current economics and changed times, especially with technology.  We have seen leaps and bounds since the law passed with Health IT and somethings need amending.

Wisconsin with their new governor has not been very happy with a lot of what has occurred since taking over and I am guessing the recall action is still alive and well.  Just a couple days ago another company called “InsureMonkey” (which I hate the name) put out a video for online shopping for insurance.  I guess we are all monkeys now when we don’t have insurance from employers.  It’s just one more effort to aggregate data and they earn the same as any commissioned sale rep for selling policies and their privacy policy is a bit unclear to me, but that’s not unusual today as we see this quite commonly with legal terminology written beyond the understanding of the average layman.

I said a while back if a platform is all we are looking for, use the one at EBay for goodness sakes and save some money.  It’s still the same old race as to who can create the most “saleable” algorithms for consumer use and of course the branding and marketing enter here as well and thus so why I think branding with the name “monkeys” sucks.

Again, I think HHS is ready for major overhauls here as they are not keeping up with regulating insurers and big business plays the business intelligence and algorithm game to the max for profits and we end up with some unintentional consequences due to that fact.  I said back when Sebelius was nominated that we needed a leader that had some Health IT in their background and over the last two years the job has expanded to where about 70-80% of the decision making processes for that job would involve Health IT and we are certainly at that point today.  We need more than just figureheads for executive departments.  BD

Six of the largest health insurance companies in Wisconsin have formed a new trade association, including four that used to belong to another group that includes Dane County's main insurers.

The alliance, announced Friday, "will advocate for essential and effective industry regulations that serve to foster innovation, eliminate waste and protect Wisconsin health care consumers," the group said in a news release.