Pomegranate juice is high in antioxidants, which of course makes it a desirable beverage to include in your diet.  The FDA considers the studies to

be too small and actually the company is really not pursuing FDA approval.  If you don’t want to drink the juice, yes you can get a pomegranate pill to take or a bottle of concentrate to take a spoonful every day.

As far as being helpful for prostate cancer and carotid arteries, a good healthy diet is good for both and has been covered many times in the press.  I had a case of the product sent to me not too long ago, and I do have to say it’s not bad, tastes ok.  It does make one good vodka martini too, actually more tasty than cranberry juice in my opinion. 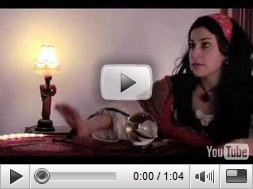 I do have to say their marketing it top notch and it’s certainly nothing that could hurt you, but drink and enjoy and hopefully good things will result.  The website has a page of published research that can be found here.  BD

What exactly does it mean when a bottle of fruit juice wearing a cape declares, "I'm off to save prostates!"? What are we to think when we see the same bottle with a hangman's noose cut from its neck and are told it can "cheat death"? And what about when it's lying on a psychoanalyst's couch and is declared to be in "heart therapy"?

pomegranate from a novelty fruit to a drinkable Fountain of Youth. Its strategy employs science, humor and rhetoric that obscures as much as it reveals.

The dozens of studies funded by Pom Wonderful have been done in numerous laboratories in the United States and Israel. The most active researcher is Michael Aviram, a biochemist on the Technion Faculty of Medicine in Haifa, Israel, who has co-authored 31 pomegranate-related papers since 1999. In an e-mail exchange, he said that Pom Wonderful pays only for research, not for advocacy, and that he has no ownership interest in the company.

- A 2004 study of 19 people found that those who drank the juice for a year had carotid arteries with thinner walls -- often a sign of less atherosclerotic plaque -- as well as less damaging "oxidative activity" of their cholesterol than when they entered the study. Their systolic (or "top") blood pressure fell 21 percent.

- A study in 2006 of 46 men who'd been treated for prostate cancer found that drinking pomegranate juice slowed the rise of prostate specific antigen (PSA), which is sometimes a sign of a recurrence of the tumor.