A while back I made a post about Windows Mobile Tags and perhaps it went a bit unnoticed, but now we have some commercial use starting.  At the

same time, I put my tag on the blog and it’s on the right hand side under the advertising information so if you want, download the software and try it out with your camera on your cell phone or use this one to the right.

Here’s mine in case you missed it on the site.  The software can be downloaded here.  This is really very cool.  Just last week it was announced that Windows Mobile units will soon be able to do ultrasounds for medical imaging.

Kurt Shintaku, who I’ve known for a number of years through the Windows Mobile Users group made the announcement on his blog at the link below. At any rate, be it the grocery store or medical imaging the cell phone lives!  I remember those very early days, oh about 10 years ago when the Mobile Users Group started and we had black and white PDAs that didn’t even include a phone.  This User’s Group by the way is the longest running and one of the first Users Groups started by Microsoft and we all kind of grew up together with mobility.  I’ll have to keep an eye out and try the phone at the grocery store.  BD

General Mills, as part of their Brand Marketing Strategy, is leveraging Microsoft Tag, to reach out to their customer base and encourage more interaction with consumers beyond just “reading an advertisement”.

By integrating Microsoft Tag, they actively engage their customers at a richer level by bridging them from static advertisements to immersive ones online that provide stronger context, interactivity, and optimally, greater consumer value. 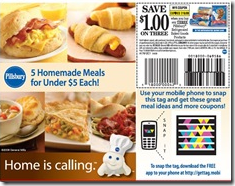 XRay Viewing with an iPhone on Microsoft Surface