Very sad to hear this today at Long Beach Memorial.  The article from the LA Times states the motive is still unclear, but that there was word of upcoming layoffs that could have had some influence.  No name has been released yet, but those who knew him, stated he was nice and always went out of his way, so again it appears pressure and economic conditions once again play a role. I always wonder why folks who shoot themselves have to include others, but again something we’ll never know.  He was married and had children.

I’m not very far from this facility and have had a couple procedures there myself a few years ago.   It was just yesterday I published my interview with Dr. James Leo about their successful move to electronic records.

In January, an 80 year old patient walked in and shot his doctor in Nevada, so the pressure and dealing with bringing a balance to life is taking a toll and this is not something predictable with an analysis, just a result of today’s economic and frustrating times, something that can happen anywhere.  BD

A gunman opened fire at Long Beach Memorial Medical Center today, killing one worker, gravely wounding another and then taking his own life as frightened onlookers watched outside the emergency room.  Police said the gunman and victims were employees of the hospital. The shooting occurred just before noon at the Atlantic Avenue hospital, which was immediately sealed off by police. 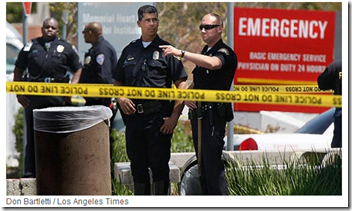 A source told The Times that the gunman first shot a pharmacy manager several times in the head and then ran through the hospital wielding at least two guns, searching for a second man. He eventually caught up with that man and shot him multiple times, the source said.